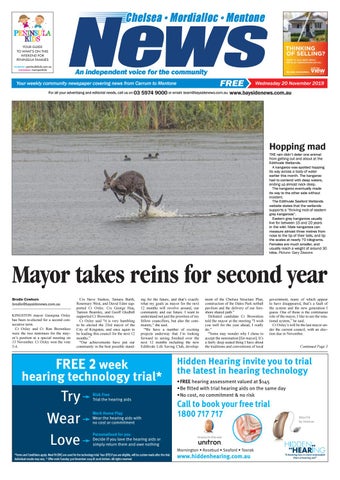 Chelsea • Mordialloc • Mentone YOUR GUIDE TO WHAT’S ON THIS WEEKEND FOR PENINSULA FAMILIES FACEBOOK:

THE rain didn’t deter one animal from getting out and about at the Edithvale Wetlands. A kangaroo was spotted hopping its way across a body of water earlier this month. The kangaroo had to contend with deep waters, ending up almost neck deep. The kangaroo eventually made its way to the other side without incident. The Edithvale Seaford Wetlands website states that the wetlands supports a “thriving mob of eastern grey kangaroos”. Eastern grey kangaroos usually live for between 15 and 20 years in the wild. Male kangaroos can measure almost three metres from nose to the tip of their tails, and tip the scales at nearly 70 kilograms. Females are much smaller, and usually reach a weight of around 30 kilos. Picture: Gary Sissons

Mayor takes reins for second year Brodie Cowburn brodie@baysidenews.com.au KINGSTON mayor Georgina Oxley has been re-elected for a second consecutive term. Cr Oxley and Cr Ron Brownlees were the two nominees for the mayor’s position at a special meeting on 13 November. Cr Oxley won the vote 5-4.

Crs Steve Staikos, Tamara Barth, Rosemary West, and David Eden supported Cr Oxley. Crs George Hua, Tamsin Bearsley, and Geoff Gledhill supported Cr Brownlees. Cr Oxley said “it is very humbling to be elected the 23rd mayor of the City of Kingston, and once again to be leading this council for the next 12 months.” “Our achievements have put our community in the best possible stand-

ing for the future, and that’s exactly what my goals as mayor for the next 12 months will revolve around, our community and our future. I want to understand not just the priorities of my fellow councillors, but also the community,” she said. “We have a number of exciting projects underway that I’m looking forward to seeing finished over the next 12 months including the new Edithvale Life Saving Club, develop-

ment of the Chelsea Structure Plan, construction of the Dales Park netball pavilion and the delivery of our foreshore shared path.” Defeated candidate Cr Brownlees told the mayor at the meeting “I wish you well for the year ahead, I really do.” “Some may wonder why I chose to accept the nomination [for mayor]. It’s a fairly deep seated thing I have about the traditions and conventions of local

*Terms and Conditions apply. Moxi Fit (RIC) are used for the technology trial. Your (ITE) if you are eligible, will be custom made after the trial. Individual results may vary. ^ Offer ends Tuesday 31st December 2019 © 2018 Unitron. All rights reserved

government, many of which appear to have disappeared, that’s a fault of the system and the new generation I guess. One of those is the continuous role of the mayor, I like to see the rotational system,” he said. Cr Oxley’s will be the last mayor under the current council, with an election due in November.