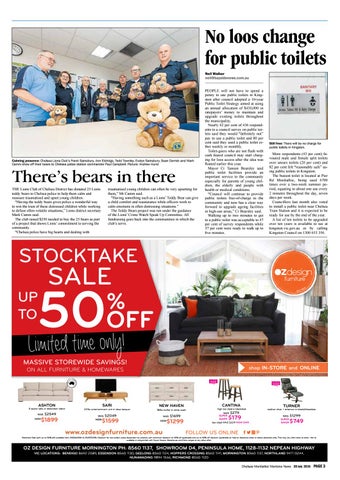 There’s bears in there

traumatised young children can often be very upsetting for them,” Mr Camm said. “Having something such as a Lions’ Teddy Bear can give a child comfort and reassurance while officers work to calm emotions in often distressing situations.” The Teddy Bears project was run under the guidance of the Lions’ Crime Watch Speak Up Committee. All fundraising goes back into the communities in which the club’s serve.

THE Lions Club of Chelsea District has donated 25 Lions teddy bears to Chelsea police to help them calm and reassure traumatised and upset young children. “Having the teddy bears gives police a wonderful way to win the trust of these distressed children while working to defuse often volatile situations,” Lions district secretary Mark Camm said. The club raised $250 needed to buy the 25 bears as part of a project that shows Lions’ commitment to serving the community. “Chelsea police have big hearts and dealing with

PEOPLE will not have to spend a penny to use public toilets in Kingston after council adopted a 10-year Public Toilet Strategy aimed at using an annual allocation of $450,000 in ratepayers’ money to maintain and upgrade existing toilets throughout the municipality. Nearly 62 per cent of 436 respondents to a council survey on public toilets said they would “definitely not” pay to use a public toilet and 80 per cent said they used a public toilet either weekly or monthly. Toilet-goers who are not flush with cash feared council may start charging for loos access after the idea was floated earlier this year. Mayor Cr Tamsin Bearsley said public toilet facilities provide an important service to the community especially for parents of young children, the elderly and people with health or medical conditions. “Council will continue to provide public toilets free-of-charge to the community and now has a clear way forward to upgrade ageing facilities in high-use areas,” Cr Bearsley said. Walking up to two minutes to get to a public toilet was acceptable to 47 per cent of survey respondents while 37 per cent were ready to walk up to five minutes.

Still free: There will be no charge for public toilets in Kingston.

More respondents (43 per cent) favoured male and female split toilets over unisex toilets (20 per cent) and 82 per cent felt “reasonably safe” using public toilets in Kingston. The busiest toilet is located at Pier Rd Mordialloc, being used 6700 times over a two-week summer period, equating to about one use every 2 minutes throughout the day, seven days per week. Councillors last month also voted to install a public toilet near Chelsea Train Station and it is expected to be ready for use by the end of the year. A list of ten toilets to be upgraded over ten years is available to see at kingston.vic.gov.au or by calling Kingston Council on 1300 653 356.

3 seater sofa in downtown fabric WAS

www.ozdesignfurniture.com.au Stocktake Sale (with up to 50% off) available from 28/06/2016 to 25/07/2016. Discount for new orders varies dependant on product, with minimum discount of 20% off applicable and up to 50% off discount applicable on floor or clearance stock at stores discretion only. This may vary from store to store. Not to available in conjunction with Super Savers, Glasshouse and Circa ranges or any other offer.