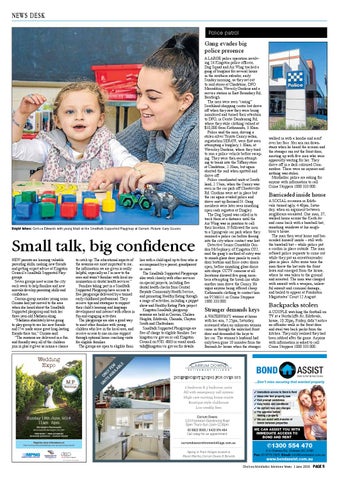 Small talk, big confidence NEW parents are learning valuable parenting skills, making new friends and getting expert advice at Kingston Council’s Smalltalk Supported Playgroups. Seven groups meet across the city each week to help families and new arrivals develop parenting skills and confidence. Carrum group member young mum Corissa had just moved to the area when she heard about the Smalltalk Supported playgroup and took her three-year-old Madison along. “Madison absolutely loves going to play group to see her new friends and I’ve made some great long-lasting friends there too,” Corissa said. “The sessions are delivered in a fun and friendly way, all of the children join in plus it gives us mums a chance

to catch up. The educational aspects of the sessions are most important to me, the information we are given is really helpful, especially as I’m new to the area and wasn’t familiar with local immunisation or dental health services.” Families taking part in a Smalltalk Supported Playgroup have access to free playgroups delivered by a trained early childhood professional. They receive tips and strategies to support their child’s learning and language development and interact with others in fun and engaging activities. The playgroups are also a good way to meet other families with young children who live in the local area, and receive access to one-on-one support through optional home coaching visits for eligible families. The groups are open to eligible fami-

Register your attendance at

lies with a child aged up to four who is accompanied by a parent, grandparent or carer. The Smalltalk Supported Playgroups also work closely with other services on special projects, including free dental health checks from Central Bayside Community Health Service, and promoting Healthy Eating through a range of activities, including a puppet show and Healthy Eating Plate project. Kingston Smalltalk playgroup sessions are held in Carrum, Chelsea Heights, Edithvale, Clarinda, Clayton South and Cheltenham. Smalltalk Supported Playgroups are free of charge to eligible families. See kingston.vic.gov.au or call Kingston Council on 9581 4863 or email smalltalk@kingston.vic.gov.au for details.

A LARGE police operation involving 24 Kingston police officers, Dog Squad and Air Wing tracked a gang of burglars for several hours in the southern suburbs, early Sunday morning, as they set out to raid stores at Chadstone, DFO Moorabbin, Waverly Gardens and a service station in East Boundary Rd, Bentleigh. The men were seen “casing” Southland shopping centre but drove off when they saw they were being monitored and turned their attention to DFO, in Centre Dandenong Rd, where they stole clothing valued at $10,000 from Kathmandu, 3.30am. Police said the men, driving a stolen silver Toyota Camry sedan, registration SER459, were first seen attempting a burglary, 1.30am, at Waverley Gardens, where they tried to ram a police vehicle before escaping. They were then seen attempting to break into the Tiffany store at Chadstone, 2.20am, but again aborted the raid when spotted and drove off. Police coordinated units at Southland, 2.55am, when the Camry was seen in the car park off Chesterville Rd. Cordons were set in place but the car again evaded police and drove east up Bernard St. Gang members were later seen smashing open cash registers at Dingley. The Dog Squad was called in to track them at a distance until the Air Wing was in position to call their location. It followed the men to a Springvale car park where they rammed a police car before fleeing into the city where contact was lost. Detective Senior Constable Gordon McSephney, of Kingston CIU, said the gang’s method of entry was to smash glass door panels to reach door buttons and force outer doors open, before smashing glass doors into shops. CCTV cameras at all locations showed five gang members attempting the break-ins while another man drove the Camry. He urges anyone being offered cheap Kathmandu clothing to contact him on 95566111 or Crime Stoppers 1800 333 000.

Stranger demands keys A WATERWAYS woman at home with her son, 7.25pm, Saturday, screamed when an unknown woman came in through the unlocked front door and demanded the keys to her car. The woman’s husband had only been gone 10 minutes from the Barmah Av house when the stranger

walked in with a hoodie and scarf over her face. Her son ran downstairs when he heard the scream and the stranger ran out the front door, meeting up with five men who were apparently waiting for her. They drove off in a dark coloured Commodore. There were no injuries and nothing was stolen. Mordialloc police are asking for anyone with information to call Crime Stoppers 1800 333 000.

A SOCIAL occasion in Edithvale turned ugly, 4.40pm, Saturday, when an argument between neighbours escalated. One man, 37, walked home across the Keith Av and came back with a baseball bat, smashing windows at his neighbour’s house. The man then went home and barricaded himself inside – still with the baseball bat – while police put a cordon in place outside. The man refused police requests to come out while they put an arrest/surrender plan in place. After some time the man threw the bat onto the front lawn and emerged from the house, where he was taken to the ground and arrested. The man was charged with assault with a weapon, unlawful assault and criminal damage, and bailed to appear at Frankston Magistrates’ Court 12 August.

Backpacks stolen A COUPLE watching the football on TV at a Northcliffe Av, Edithvale, house, 10.20pm, Friday, didn’t notice an offender walk in the front door and steal two back packs from the kitchen. They only realised they had been robbed after the game. Anyone with information is asked to call Crime Stoppers 1800 333 000.