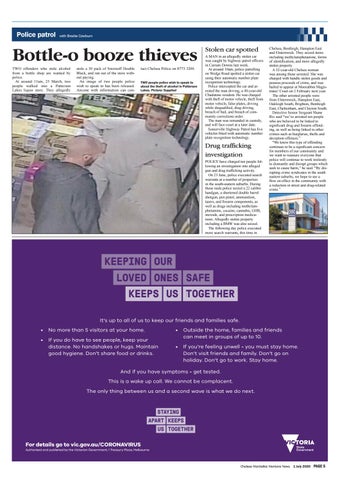 Bottle-o booze thieves TWO offenders who stole alcohol from a bottle shop are wanted by police. At around 11am, 25 March, two people walked into a Patterson Lakes liquor store. They allegedly

stole a 30 pack of Smirnoff Double Black, and ran out of the store without paying. An image of two people police wish to speak to has been released. Anyone with information can con-

tact Chelsea Police on 8773 3200. TWO people police wish to speak to about the theft of alcohol in Patterson Lakes. Picture: Supplied

Stolen car spotted A MAN in an allegedly stolen car was caught by highway patrol officers in Carrum Downs last week. At around 10am, police patrolling on Wedge Road spotted a stolen car using their automatic number plate recognition technology. Police intercepted the car and arrested the man driving, a 40-year-old Chadstone resident. He was charged with theft of motor vehicle, theft from motor vehicle, false plates, driving while disqualified, drug driving, breach of bail, and breach of community corrections order. The man was remanded in custody, and will face court at a later date. Somerville Highway Patrol has five vehicles fitted with automatic number plate recognition technology.

Chelsea, Bentleigh, Hampton East and Elsternwick. They seized items including methylamphetamine, forms of identification, and more allegedly stolen property. A 32-year-old Chelsea woman was among those arrested. She was charged with handle stolen goods and possess proceeds of crime, and was bailed to appear at Moorabbin Magistrates’ Court on 2 February next year. The other arrested people were from Elsternwick, Hampton East, Oakleigh South, Brighton, Bentleigh East, Cheltenham, and Clayton South. Detective Senior Sergeant Shane Rix said “we’ve arrested ten people who are believed to be linked to significant drug and firearm offending, as well as being linked to other crimes such as burglaries, thefts and deception offences.” “We know this type of offending continues to be a significant concern for members of our community and we want to reassure everyone that police will continue to work tirelessly to dismantle and disrupt groups which seek to cause harm,” he said. “By disrupting crime syndicates in the south eastern suburbs, we hope to see a flow on effect in the community with a reduction in street and drug-related crime.”

KEEPING OUR LOVED ONES SAFE KEEPS US TOGETHER It’s up to all of us to keep our friends and families safe. •

No more than 5 visitors at your home.

If you do have to see people, keep your distance. No handshakes or hugs. Maintain good hygiene. Don’t share food or drinks.

Outside the home, families and friends can meet in groups of up to 10.

And if you have symptoms - get tested. This is a wake up call. We cannot be complacent. The only thing between us and a second wave is what we do next.

For details go to vic.gov.au/CORONAVIRUS Authorised and published by the Victorian Government, 1 Treasury Place, Melbourne