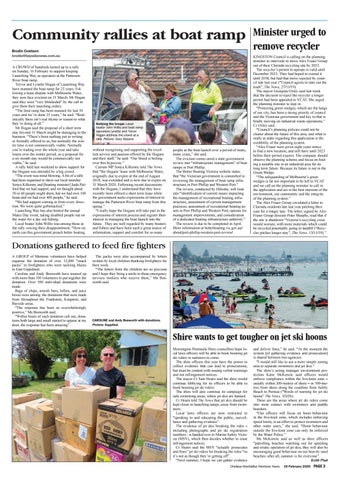 Community rallies at boat ramp Brodie Cowburn brodie@baysidenews.com.au A CROWD of hundreds turned up to a rally on Sunday, 16 February to support keeping Launching Way as operators at the Patterson River boat ramp. Trevor and Lynette Hogan of Launching Way have manned the boat ramp for 25 years. Following a lease dispute with Melbourne Water, they now face eviction on 31 March. Mr Hogan said they were “very blindsided” by the call to give them their marching orders. “The boat ramp has been manned for last 50 years and we’ve done 25 years,” he said. “Realistically there isn’t real rhyme or reason to what they’re doing at all.” Mr Hogan said the proposal of a short term stay beyond 31 March might be damaging to the business. “There’s been nothing put in writing or formally offered to us, but normally the winter time is not commercially viable. Normally you’re trading over the whole year and take losses over the winter period, so a proposal for a six month stay would be commercially not viable,” he said. A rally held last weekend to show support for the Hogans was attended by a big crowd. “The event was mind blowing. A bit of a rally had been organised to show our local member Sonya Kilkenny and [boating minister] Jaala Pulford that we had support, and we thought about 50 or 60 people might show, but we had over 100 boats and we had over 400 people,” he said. “We had support coming in from every direction. We were quite gobsmacked.” Launching Way has also hosted the annual Mates Day event, taking disabled people out on the water for a day out fishing. Local boater John Willis was among those at the rally voicing their disappointment. “How on earth can this government preach better boating

without recognising and supporting the excellent service and passion offered by the Hogans and their staff,” he said. “Our blood is boiling over this hypocrisy.” Carrum MP Sonya Kilkenny told The News that “the Hogans’ lease with Melbourne Water, originally due to expire at the end of August 2018, was extended and is now due to expire on 31 March 2020. Following recent discussions with the Hogans, I understand that they have recently been offered a short term lease while the government seeks expressions of interest to manage the Patterson River boat ramp from this spring.” “I really hope the Hogans will take part in the expressions of interest process and register their interest in managing the boat launch into the future. They are well regarded by many boaters and fishers and have been such a great source of information, support and comfort for so many

people at the boat launch over a period of many, many years,” she said. The eviction comes amid a state government review into “infrastructure management” of boat ramps in Port Phillip. The Better Boating Victoria website states that “the Victorian government is committed to reviewing the management of boat ramp infrastructure in Port Phillip and Western Port.” The review, conducted by Deloitte, will look into “identification of current issues impacting the management of recreational boating infrastructure, assessment of current management practices, assessment of recreational boating assets in Port Phillip and Western Port, options for management improvements, and consideration of a dedicated boating infrastructure authority.” The review is due to be completed in April. More information at betterboating.vic.gov.au/ about/port-phillip-western-port-review/

Minister urged to remove recycler KINGSTON Council is calling on the planning minister to intervene to move Alex Fraser Group out of their Clarinda recycling site by 2023. The recycler’s permit to operate is valid until December 2023. They had hoped to extend it until 2038, but had that move rejected by council late last year (“Council agrees to take out the trash”, The News, 27/11/19). The mayor Georgina Oxley said last week that the decision to reject the recycler a longer permit had been appealed to VCAT. She urged the planning minister to step in. “Protecting green wedges, which are the lungs of our city, has been a strong priority of council and the Victorian government and key to that is finally moving on industrial waste operations,” Cr Oxley said. “Council’s planning policies could not be clearer about the future of this area, and what is really at stake regarding this application is the credibility of the planning system. “Alex Fraser were given eight years notice to find a new location, and still have until 2023 before their permit expires. The company should observe the planning scheme and focus on finding a suitable site in an industrial area for its long term future. Because its future is not in the Green Wedge. “The safeguarding of Melbourne’s green wedges is far too important to be left to VCAT and we call on the planning minister to call in the application and act in the best interests of the environment, our community and the integrity of the planning system.” The Alex Fraser Group circulated a letter to Clarinda residents late last year pitching their case for a longer stay. The letter, signed by Alex Fraser Group director Peter Murphy, read that if the site is shutdown “Victoria’s recycling crisis would worsen, with more materials which could be recycled potentially going to landfill (“Recycler pitches longer stay”, The News, 13/11/19).”

Donations gathered to feed fire fighters A GROUP of Mentone volunteers have helped organise the donation of over 12,000 “snack packs” to firefighters who were tackling blazes in East Gippsland. Caroline and Andy Bosworth have teamed up with more than 100 volunteers to put together the donation. Over 500 individual donations were made. Bags of chips, muesli bars, lollies, and juice boxes were among the donations that were made from throughout the Frankston, Kingston, and Bayside areas. “The response has been so overwhelmingly positive,” Ms Bosworth said. “Within hours of each donation call out, donations both large and small started to appear at my door, the response has been amazing”.

The packs were also accompanied by letters written by local children thanking firefighters for their work. “The letters from the children are so precious and I hope they bring a smile to those emergency services workers who receive them,” Ms Bosworth said.

Shire wants to get tougher on jet ski hoons Mornington Peninsula Shire councillors hope local laws officers will be able to book hooning jet ski riders in summers to come. The shire officers this year have the power to collect evidence that can lead to prosecutions, but must be content with issuing verbal warnings and not infringement notices. The mayor Cr Sam Hearn said the shire would continue lobbying for its officers to be able to book hooning jet ski riders. The shire will also continue its campaign for safe swimming areas, where jet skis are banned. Cr Hearn told The News that jet skis should be kept closer to launching ramps, away from swimmers. Local laws officers are now restricted to “speaking to and educating the public, surveillance and gathering evidence”. The evidence of jet skis breaking the rules – including photographs and jet ski registration numbers - is handed over to Marine Safety Victoria (MSV), which then decides whether to issue infringement notices. Cr Hearn said the MSV “actually prosecutes and fines” jet ski riders for breaking the rules “so it’s not as though they’re getting off”. “Next summer, I hope we can gather evidence

and deliver fines,” he said. “At the moment the system [of gathering evidence and prosecution] is shared between two agencies. “I would still like to see a more simple zoning area to separate swimmers and jet skis.” The shire’s acting manager environment protection Katie McKenzie said officers would enforce compliance within the five-knot zone – usually within 200-metres of shore – or 500-metres from shore along the coastline from Safety Beach to Portsea (“Words of warning for jet ski hoons” The News, 3/2/20). These are the areas where jet ski riders come into most contact with swimmers and paddle boarders. “Our officers will focus on hoon behaviour in the five-knot zone, which includes enforcing speed limits, in an effort to protect swimmers and other water users,” she said. “Hoon behaviour outside the five-knot zone can only be enforced by the Water Police.” Ms McKenzie said as well as shire officers “patrolling beaches watching out for speeding and erratic operation of jet skis, they will also be encouraging good behaviour on our heavily used beaches: after all, summer is for everyone”. Keith Platt