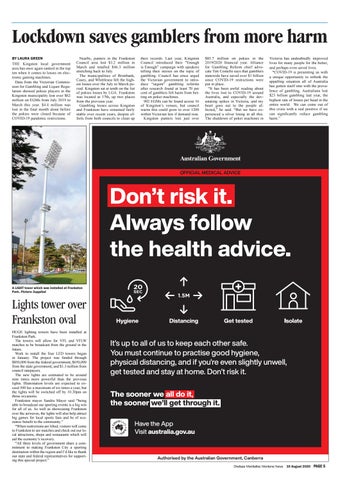 Lockdown saves gamblers from more harm BY LAURA GREEN THE Kingston local government area has once again ranked in the top ten when it comes to losses on electronic gaming machines. Data from the Victorian Commission for Gambling and Liquor Regulation showed pokies players in the Kingston municipality lost over $62 million on EGMs from July 2019 to March this year. $4.4 million was lost in the final month alone before the pokies were closed because of COVID-19 pandemic restrictions.

Nearby, punters in the Frankston Council area lost $3.2 million in March and totalled $46.3 million stretching back to July. The municipalities of Brimbank, Casey, and Whittlesea felt the highest losses over the July to March period. Kingston sat at tenth on the list of pokies losses by LGA. Frankston was located at 17th, up two places from the previous year. Gambling losses across Kingston and Frankston have remained fairly stable over recent years, despite efforts from both councils to clean up

their records. Last year, Kingston Council introduced their “Enough is Enough” campaign with speakers telling their stories on the topic of gambling. Council has since urged the Victorian government to introduce “urgent” gambling reforms after research found at least 70 per cent of gamblers felt harm from betting on poker machines. 902 EGMs can be found across 16 of Kingston’s venues, but council warns this could grow to over 1200 within Victorian law if demand rose. Kingston punters lost just over

$85.7 million on pokies in the 2019/2020 financial year. Alliance for Gambling Reform chief advocate Tim Costello says that gamblers statewide have saved over $1 billion since COVID-19 restrictions were put in place. “It has been awful reading about the lives lost to COVID-19 around Australia, and especially the devastating spikes in Victoria, and my heart goes out to the people affected,” he said. “But we have experienced a silver lining in all this. The shutdown of poker machines in

Victoria has undoubtedly improved lives for many people for the better, and perhaps even saved lives. “COVID-19 is presenting us with a unique opportunity to rethink the appalling situation all of Australia has gotten itself into with the prevalence of gambling. Australians lost $25 billion gambling last year, the highest rate of losses per head in the entire world. We can come out of this crisis with a real positive if we can significantly reduce gambling harm.”

Don’t risk it. Always follow the health advice. A LIGHT tower which was installed at Frankston Park. Picture: Supplied

Lights tower over Frankston oval HUGE lighting towers have been installed at Frankston Park. The towers will allow for VFL and VFLW matches to be broadcast from the ground in the future. Work to install the four LED towers began in January. The project was funded through $850,000 from the federal government, $650,000 from the state government, and $1.3 million from council ratepayers. The new lights are estimated to be around nine times more powerful than the previous lights. Illumination levels are expected to exceed 500 lux a maximum of six times a year, but the lights will be switched off by 10.30pm on those occasions. Frankston mayor Sandra Mayer said “being able to broadcast our sporting events is a big win for all of us. As well as showcasing Frankston over the airwaves, the lights will also help attract big games for local sports fans and be of economic benefit to the community.” “When restrictions are lifted, visitors will come to Frankston to see matches and check out our local attractions, shops and restaurants which will aid the economy’s recovery. “All three levels of government share a commitment to making Frankston City a sporting destination within the region and I’d like to thank our state and federal representatives for supporting this special project.”