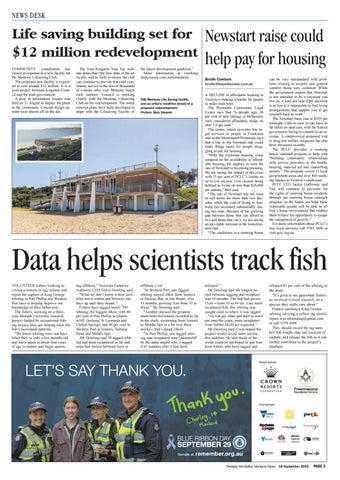 Life saving building set for $12 million redevelopment COMMUNITY consultation has closed in response to a new facility for the Mentone Lifesaving Club. The proposed new facility is expected to cost around $12 million. It is a joint project between Kingston Council and the state government. A drop in information session was held on 31 August to display the plans to the community. Concept design options were shown off on the day.

The Your Kingston Your Say website states that “the new state of the art facility will be built to ensure the club can continue to provide this vital community service to the tens of thousands of visitors who visit Mentone beach each summer. Council is working closely with the Mentone Lifesaving Club on the redevelopment. The initial concept plans have been developed to align with the Lifesaving Facility of

Newstart raise could help pay for housing Brodie Cowburn brodie@baysidenews.com.au A DECLINE in affordable housing in Victoria is making it harder for people to make ends meet. The Peninsula Community Legal Centre says that “a decade ago, 30 per cent of new lettings in Melbourne were considered affordable, today its only 7.6 per cent.” The centre, which provides free legal services to people in Frankston and on the Mornington Peninsula, says that a rise in the Newstart rate could make things easier for people struggling to pay for housing. “With the Victorian housing crisis centered on the availability of affordable housing, the urgency to raise the rate of Newstart is becoming pressing. We are seeing the impact of the crisis with 75 per cent of PCLC’s clients on no to low income. Low income being defined as living on less than $26,000 per annum,” they said. “The rate of Newstart has not risen in real terms for more than two decades, while the cost of living in Australia has increased substantially during this time. Because of the growing gap between those that can afford to live and those that can’t, we are seeing an inevitable increase in the homelessness rate. “The conditions in a rooming house

can be very substandard with problems relating to security and general comfort being very common. While the government argues that Newstart is not intended to be a payment you live on, it does not help if the payment is so low it is impossible to find living arrangements that support you to get yourself back to work.” The Newstart basic rate is $555 per fortnight. Calls to raise to rate have so far fallen on deaf ears, with the federal government failing to commit to an increase. A controversial proposed trial to drug test welfare recipients has also been discussed recently. The PCLC provides a rooming house outreach program to help with “building community relationships with service providers in the health, housing, material aid and counselling sectors.” The program covers 17 local government areas and over 800 rooming houses in Victoria’s south-east. PCLC CEO Jackie Gallloway said “we will continue to advocate for the rights of rooming house residents through our rooming house outreach program. In the future, we hope these vulnerable people will be able to afford a home environment that enables them to have the opportunity to escape the entrapment of poverty.” For more information about PCLC’s free legal services, call 9783 3600 or visit pclc.org.au.

Data helps scientists track fish VOLUNTEER fishers working as citizen scientists to tag, release and report the capture of King George whiting in Port Phillip and Western Port bays is helping improve our knowledge of their behaviour. The fishers, working on a threeyear Monash University research project funded by recreational fishing licence fees, are helping track the fish’s movement patterns. “We know whiting enter our bays when they’re only a few months old and leave again at about four years of age to mature and begin spawn-

ing offshore,” Victorian Fisheries Authority CEO Travis Dowling said. “What we don’t know is how juveniles move within and between our bays up until they depart.” Fishers have tagged nearly 700 whiting, the biggest 48cm, with 60 per cent in Port Phillip at Queenscliff, Geelong, St Leonards and Clifton Springs, and 40 per cent in Western Port at Somers, Tortoise Head and Middle Spit. Mr Dowling said 39 tagged whiting had been recaptured so far and none had moved between bays or

offshore – yet. “In Western Port, one tagged whiting moved 20km from Somers to Dickies Bay, at San Remo, over 11 months, growing 5cm from 35 to 40cm,” Mr Dowling said. “Another showed the greatest short-term movement recorded so far in the study, swimming from Somers to Middle Spit in a bit over three weeks – that’s about 24km! “In Port Phillip, one tagged whiting was recaptured near Queenscliff by the same angler who’d tagged it 45 minutes after it had been

released.” Mr Dowling said the longest period between tagging and recapture was 16 months. The fish had grown 11cm – from 33 to 44 cm. Like most recaptured fish, this whiting was caught close to where it was tagged. “As fish get older and start to move out onto the coast, more recaptures from further afield are expected.” Mr Dowling said it was hoped the project would reveal more secrets this summer. He said much of the credit could be attributed to just four keen fishers who have tagged and

released 83 per cent of the whiting in the study. “It’s great to see passionate fishers so involved in local research, on a species they really care about.” Fishers catching a King George whiting carrying a yellow tag should report it to whitingtag@gmail.com or call 5258 3686. They should record the tag number, fish length, date and location of capture, and release the fish so it can further contribute to the project’s database.