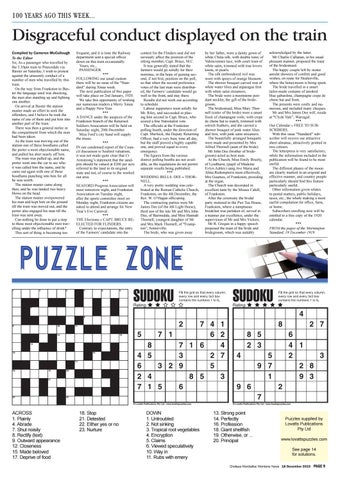 Disgraceful conduct displayed on the train Compiled by Cameron McCullough To the Editor Sir, As a passenger who travelled by the 5.10pm train to Pearcedale via Baxter on Saturday, I wish to protest against the unseemly conduct of a number of men who travelled by this train. On the way from Frankston to Baxter the language used was shocking, the men also standing up and fighting one another. On arrival at Baxter the station master made an effort to seek the offenders, and I believe he took the name of one of them and put him into another part of the train. There was then a general melee in the compartment from which the man had been taken. As the train was moving out of the station one of these hoodlums called the porter a most objectionable name, and pulled his shirt nearly off him. The train was pulled up, and the porter went into the car to see who it was called him the name, and he came out again with one of these hoodlums punching into him for all he was worth. The station master came along then, and he was landed two heavy blows on the head. The station master overpowered his man and kept him on the ground till the train was moved out, and the porter also engaged his man till the train was sent away. Can nothing be done to put a stop to these most objectionable men travelling under the influence of drink? This sort of thing is becoming too

frequent, and it is time the Railway department sent a special officer down on this train occasionally. Yours, etc., PASSENGER. *** FOLLOWING our usual custom there will be no issue of the “Standard” during Xmas week. The next publication of this paper will take place on 2nd January, 1920. We take this opportunity of wishing our numerous readers a Merry Xmas and a Happy New Year. *** A DANCE under the auspices of the Frankston branch of the Returned Soldiers Association will be held on Saturday night, 20th December. Miss Ford’s city band will supply the music. *** IN our condensed report of the Council discussion re Seaford valuation, it was not made quite clear that Cr Armstrong’s statement that the sandpits should be valued at £200 per acre referred to the land in its original state and not, of course to the worked out area. *** SEAFORD Progress Association will meet tomorrow night, and Frankston Association on Tuesday night, after the sports committee meet on Monday night, Frankston citizens are asked to attend and arrange for New Year’s Eve Carnival. *** THE Elections – CAPT. BRUCE REELECTED FOR FLINDERS. Contrary to expectations, the entry of the Farmers’ candidate into the

contest for the Flinders seat did not seriously affect the position of the sitting member, Capt. Bruce, M.C. It was generally stated that the farmers would go solidly for their nominee, in the hope of gaining second, if not first, position on the poll, so that when the second preference votes of the last man were distributed, the Farmers’ candidate would go well to the front, and stay there. Results did not work out according to schedule. Labour supporters went solidly for Mr. Riley, and succeeded in placing him second to Capt. Bruce, who scored a fine Nationalist vote. The officials at the Frankston polling booth, under the direction of Capt. Sherlock, the Deputy Returning Officer, had a very busy time all day, but the staff proved a highly capable one, and proved equal to every emergency. The figures from the various district polling booths are not available, as the regulations do not permit separate results being published. *** WEDDING BELLS. DEE – THORNELL. A very pretty wedding was celebrated at the Roman Catholic Church, Frankston, on the 4th December, the Rev. W. O’Hagan officiating. The contracting parties were Mr James Dee (of the 4th Light Horse), third son of the late Mr and Mrs John Dee, of Bairnsdale, and Miss Hannah Thornell, youngest daughter of Mr and Mrs Mark Thornell, of “Frampton”, Somerville. The bride, who was given away

by her father, wore a dainty gown of white China silk, with double tunic of Valenciennes lace, with court train of white satin, trimmed with true lovers knots, in pearls. The silk embroidered veil was worn with sprays of orange blossom. The shower bouquet carried was of white water lilies and asparagus fern with white satin streamers. The bride wore a moonstone pendant necklet, the gift of the bridegroom. The bridesmaid, Miss Mary Thornell (sister of the bride) wore a smart frock of champagne voile, with crepe de chene hat to match, trimmed with ostrich feathers, and she carried a shower bouquet of pink water lilies and fern, with pink satin streamers. The beautifully arranged bouquets were made and presented by Mrs Alfred Thornell (aunt of the bride). Mr John Dee (brother of bridegroom) acted as best man. At the Church, Miss Emily Brierly, of Lyndhurst, (pupil of Mademe Evlyn Ashley) sang Ave Maria and Alma Redemptoris most effectively, Mrs Guumes, of Frankston, presiding at the organ. The Church was decorated in excellent taste by the Misses Cahill, of Frankston. After the ceremony the bridal party motored to the Pier Tea House, Frankston, where a sumptuous breakfast was partaken of, served in a manner par excellence, under the supervision of Mr and Mrs Vickers. Mr R. Gregan in a happy speech proposed the toast of the bride and bridegroom, which was suitably

acknowledged by the latter. Mr Charlie Callanan, in his usual pleasant manner, proposed the toast of the bridesmaid. The happy couple left by motor amidst showers of confetti and good wishes, en route for Healesville, where the honeymoon is being spent. The bride travelled in a smart tailor-made costume of smoked blue gabardine, champagne crepe de chene hat and front. The presents were costly and numerous, and included many cheques. Mr and Mrs James Dee will, reside at “Clyde Vale”, Warragul. *** Our Calendar – FREE TO SUBSCRIBERS. With this issue “Standard” subscriber will receive our attractive sheet almanac, attractively printed in two colours. The letterpress is very satisfactory, while the information included in the publication will be found to be most useful. The different phases of the moon are clearly marked in an original and effective manner, and country people particularly should find this feature particularly useful. Other information given relates to postal matters, public holidays, taxes, etc., the whole making a most useful compilation for office, farm, or home. Subscribers enrolling now will be entitled to a free copy of the 1920 calendar. *** FROM the pages of the Mornington Standard, 19 December 1919