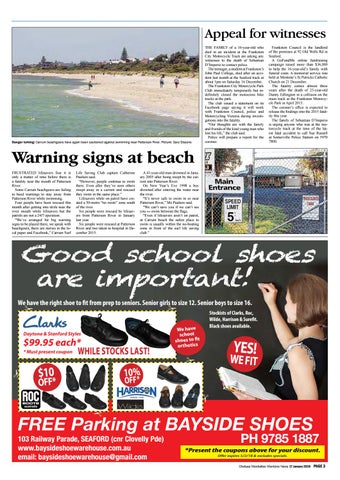 THE FAMILY of a 16-year-old who died in an incident at the Frankston City Motorcycle Track are asking any witnesses to the death of Sebastian D’Imperio to contact police. The teenager, a student at Frankston’s John Paul College, died after an accident last month at the Seaford track at about 1pm on Saturday 16 December. The Frankston City Motorcycle Park Club immediately temporarily but indefinitely closed the motocross bike tracks at the park. The club issued a statement on its Facebook page saying it will work with Frankston Council, police and Motorcycling Victoria during investigations into the fatality. “Our thoughts are with the family and friends of the kind young man who lost his life,” the club said. Police will prepare a report for the coroner.

Frankston Council is the landlord of the premises at 92 Old Wells Rd in Seaford. A GoFundMe online fundraising campaign raised more than $36,000 to help the 16-year-old’s family with funeral costs. A memorial service was held at Mentone’s St Patricks Catholic Church on 21 December. The fatality comes almost three years after the death of 25-year-old Danny Edlington in a collision on the main track at the Frankston Motorcycle Park in April 2015. The coroner’s office is expected to release the findings into the 2015 fatality this year. The family of Sebastian D’Imperio is urging anyone who was at the motorcycle track at the time of the latest fatal accident to call Sue Russell at Somerville Police Station on 5970 7800.

Warning signs at beach FRUSTRATED lifesavers fear it is only a matter of time before there is a fatality near the mouth of Patterson River. Some Carrum beachgoers are failing to heed warnings to stay away from Patterson River while swimming. Four people have been rescued this month after getting into strife near the river mouth while lifesavers but the patrols are not a 24/7 operation. “We’ve arranged for big warning signs to be placed there, we speak with beachgoers, there are stories in the local paper and Facebook,” Carrum Surf

Life Saving Club captain Catherine Paulsen said. “However, people continue to swim there. Even after they’ve seen others swept away in a current and rescued they swim in the same place.” Lifesavers while on patrol have created a 50-metre “no swim” zone south of the river. Six people were rescued by lifesavers from Patterson River in January last year. Six people were rescued at Patterson River and two taken to hospital in December 2015.

A 41-year-old man drowned in January 2005 after being swept by the current into Patterson River. On New Year’s Eve 1998 a boy drowned after entering the water near the river. “It’s never safe to swim in or near Patterson River,” Ms Paulsen said. “We can’t save you if we can’t see you — swim between the flags. “Even if lifesavers aren’t on patrol, at Carrum beach the safest place to swim is usually within the no-boating zone in front of the surf life saving club.”

We have the right shoe to fit from prep to seniors. Senior girls to size 12. Senior boys to size 16.

We have school shoes to fit orthotics