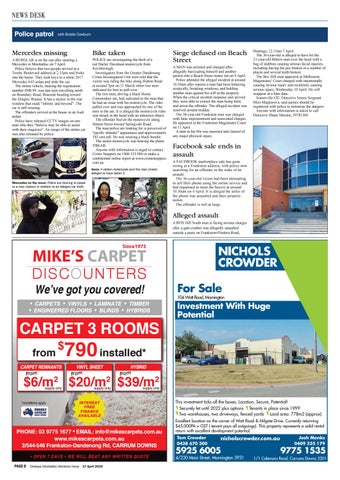 A BURGLAR is on the run after stealing a Mercedes in Mordialloc on 7 April. Police believe that two people arrived at a Treeby Boulevard address at 2.55pm and broke into the home. They took keys to a white 2017 Mercedes A45 sedan and stole the car. The stolen vehicle, bearing the registration number INB-99, was last seen travelling north on Boundary Road, Braeside heading toward the Dingley Bypass. It has a sticker in the rear window that reads “infinity and beyond”. The car is still missing. The offenders arrived at the house in an Audi sedan. Police have released CCTV images on one man who they “believe may be able to assist with their enquiries”. An image of the stolen car was also released by police.

POLICE are investigating the theft of a red Harley Davidson motorcycle from Keysborough. Investigators from the Greater Dandenong Crime Investigation Unit were told that the victim was riding the bike along Hutton Road at around 7pm on 21 March when two men indicated for him to pull over. The two men, driving a black Home Commodore ute, had indicated to the man that he had an issue with his motorcycle. The rider pulled over and was approached by one of the men in the ute. It is alleged the motorcycle rider was struck in the head with an unknown object. The offender fled on the motorcycle along Hutton Street toward Springvale Road. The man police are looking for is perceived of “pacific islander” appearance and approximately 183 cms tall. He was wearing a black hoodie. The stolen motorcycle was bearing the plates YBEAR. Anyone with information is urged to contact Crime Stoppers on 1800 333 000 or make a confidential online report at www.crimestoppers. com.au Gone: A stolen motorcycle and the man (inset) alleged to have taken it.

Mercedes on the move: Police are looking to speak to a man (below) in relation to an alleged car theft.

Siege defused on Beach Street A MAN was arrested and charged after allegedly barricading himself and another person into a Beach Street motor inn on 9 April. Police attended the alleged incident at around 10.30am after reports a man had been behaving erratically, breaking windows, and holding another man against his will at the property. When the critical incident response unit arrived they were able to extract the man being held, and arrest the offender. The alleged incident was resolved around midday. The 38-year-old Frankston man was charged with false imprisonment and associated charges. He appeared at the Frankston Magistrates Court on 11 April. A man in his 40s was assessed and cleared of any major physical injury.

Hastings, 12.15am 7 April. The 36-year-old is alleged to have hit the 21-year-old Bittern man over the head with a bag of stubbies causing serious facial injuries, including having his jaw broken in a number of places and several teeth broken. The Box Hill man appeared at Melbourne Magistrates’ Court charged with intentionally causing serious injury and recklessly causing serious injury, Wednesday 10 April. He will reappear at a later date. Somerville CIU Detective Senior Sergeant Miro Majstorovic said parties should be registered with police to minimise the dangers. Anyone with information is asked to call Detective Shane Moodie, 59781300

Facebook sale ends in assault A FACEBOOK marketplace sale has gone wrong at a Frankston address, with police now searching for an offender in the wake of an assault. The 36-year-old victim had been attempting to sell their phone using the online service and had organised to meet the buyers at around 10.30am on 4 April. It is alleged the seller of the phone was assaulted and their property stolen. The offender is still at large.

Alleged assault A BOX Hill South man is facing serious charges after a gate-crasher was allegedly assaulted outside a party on Frankston-Flinders Road,

DISCOUNTERS We’ve got you covered!