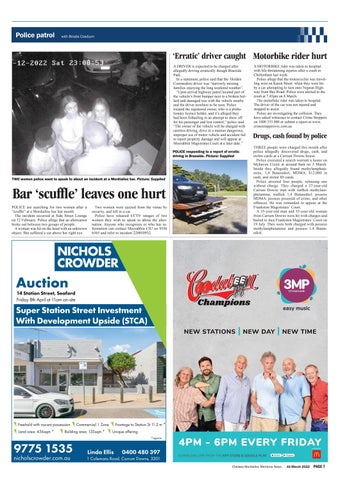 ‘Erratic’ driver caught Motorbike rider hurt A DRIVER is expected to be charged after allegedly driving erratically though Braeside Park. In a statement, police said that the Holden Commodore driver was “narrowly missing families enjoying the long weekend weather”. “Upon arrival highway patrol located part of the vehicle’s front bumper next to a broken bollard and damaged tree with the vehicle nearby and the driver nowhere to be seen. Police located the registered owner, who is a probationary licence holder, and it’s alleged they had been fishtailing in an attempt to show off for his passenger and lost control,” police said. “The owner of the vehicle will be charged with careless driving, drive in a manner dangerous, improper use of motor vehicle and accident fail to report property damage and will appear at Moorabbin Magistrates Court at a later date.” POLICE responding to a report of erratic driving in Braeside. Picture: Supplied

TWO women police want to speak to about an incident at a Mordialloc bar. Picture: Supplied

Bar ‘scuffle’ leaves one hurt POLICE are searching for two women after a “scuffle” at a Mordialloc bar last month. The incident occurred at Side Street Lounge on 12 February. Police allege that an altercation broke out between two groups of people. A woman was hit on the head with an unknown object. She suffered a cut above her right eye.

Two women were ejected from the venue by security, and left in a car. Police have released CCTV images of two women they wish to speak to about the alternation. Anyone who recognises or who has information can contact Moorabbin CIU on 9556 6565 and refer to incident 220050932.

A MOTORBIKE rider was taken to hospital with life-threatening injuries after a crash in Cheltenham last week. Police allege that the motorcyclist was travelling west on Karen Street when they were hit by a car attempting to turn onto Nepean Highway from Bay Road. Police were alerted to the crash at 7.45pm on 8 March. The motorbike rider was taken to hospital. The driver of the car was not injured and stopped to assist. Police are investigating the collision. They have asked witnesses to contact Crime Stoppers on 1800 333 000 or submit a report at www. crimestoppersvic.com.au

Drugs, cash found by police THREE people were charged this month after police allegedly discovered drugs, cash, and stolen cards at a Carrum Downs house. Police executed a search warrant a house on Myhaven Cicuit at around 8am on 3 March. Inside they allegedly found methylamphetamine, 1,4 Butanediol, MDMA, $12,000 in cash, and stolen ID cards. Police arrested four people, releasing one without charge. They charged a 37-year-old Carrum Downs man with traffick methylamphetamine, traffick 1,4 Butanediol, possess MDMA, possess proceeds of crime, and other offences. He was remanded to appear at the Frankston Magistrates’ Court. A 35-year-old man and 35-year-old woman from Carrum Downs were hit with charges and bailed to face Frankston Magistrates’ Court on 19 July. They were both charged with possess methylamphetamine and possess 1,4 Butanediol.