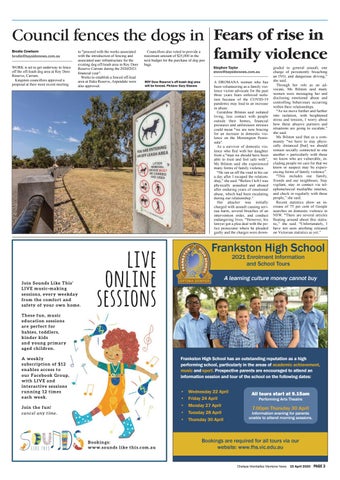 WORK is set to get underway to fence off the off-leash dog area at Roy Dore Reserve, Carrum. Kingston councillors approved a proposal at their most recent meeting

to “proceed with the works associated with the introduction of fencing and associated user infrastructure for the existing dog off-leash area in Roy Dore Reserve Carrum during the 2020/2021 financial year”. Works to establish a fenced off-lead area at Iluka Reserve, Aspendale were also approved.

Councillors also voted to provide a maximum amount of $25,000 in the next budget for the purchase of dog poo bags.

Stephen Taylor steve@baysidenews.com.au A DROMANA woman who has been volunteering as a family violence victim advocate for the past three years fears enforced isolation because of the COVID-19 pandemic may lead to an increase in abuse. Geraldine Bilston said isolated living, less contact with people outside their homes, financial pressures and unforeseen stresses could mean “we are now bracing for an increase in domestic violence on the Mornington Peninsula”. As a survivor of domestic violence who fled with her daughter from a “man we should have been able to trust and feel safe with”, Ms Bilston said she experienced many forms of family violence. “He ran us off the road in his car a day after I escaped the relationship,” she said. “Before I left I was physically assaulted and abused after enduring years of emotional abuse, which had been escalating during our relationship.” Her attacker was initially charged with assault causing serious harm, several breaches of an intervention order, and conduct endangering lives. “However, his lawyer got a plea deal with the police prosecutor where he pleaded guilty and the charges were down-

graded to general assault, one charge of persistently breaching an IVO, and dangerous driving,” she said. Through her role as an advocate, Ms Bilston said many women were messaging her and disclosing emotional abuse and controlling behaviours occurring within their relationships. “As we move further and further into isolation, with heightened stress and tension, I worry about how these abusive partners and situations are going to escalate,” she said. Ms Bilston said that as a community “we have to stay physically distanced [but] we should remain socially connected to one another – particularly with those we know who are vulnerable, including people we care for that we know or suspect may be experiencing forms of family violence”. “This includes our family, friends and our neighbours. Stay vigilant, stay in contact via telephone/social media/the internet, and check in regularly with these people,” she said. Recent statistics show an increase of 75 per cent of Google searches on domestic violence in NSW. “There are several articles floating around about this statistic,” she said. “Unfortunately, I have not seen anything released on Victorian statistics as yet.”

All tours start at 9.15am Performing Arts Theatre

Bookings are required for all tours via our website: www.fhs.vic.edu.au Chelsea Mordialloc Mentone News