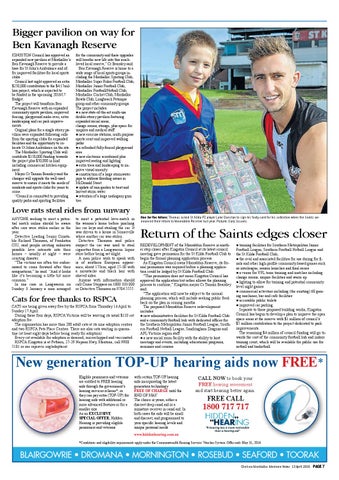 Bigger pavilion on way for Ben Kavanagh Reserve KINGSTON Council has approved an expanded new pavilion at Mordialloc’s Ben Kavanagh Reserve to provide a base for St John’s Ambulance and offer improved facilities for local sports clubs. Council last night approved an extra $250,000 contribution to the $4.17million project, which is expected to be funded in the upcoming 2016/17 Budget. The project will transform Ben Kavanagh Reserve with an expanded community sports pavilion, improved fencing, playground make-over, extra landscaping and car park improvements. Original plans for a single storey pavilion were expanded following calls from the sporting clubs for expanded facilities and the opportunity to colocate St Johns Ambulance on the site. The Mordialloc Sporting Club will contribute $150,000 funding towards the project plus $50,000 in kind including commercial kitchen equipment. Mayor Cr Tamsin Bearsley said the changes will upgrade the well-used reserve to ensure it meets the needs of residents and sports clubs for years to come. “Council is committed to providing quality parks and sporting facilities

Love rats steal rides from unwary ANYONE seeking to meet a potential match online should be aware after cars were stolen earlier in the year. Detective Leading Senior Constable Richard Thomson, of Frankston CIU, said people inviting unknown possible love interests into their homes – usually at night – were courting disaster. “The victims are often too embarrassed to come forward after their assignations,” he said. “And it looks like it’s becoming a little bit more common.” In one case in Langwarrin on Sunday 3 January a man arranged

to meet a potential love-match in the woman’s home before pinching her car keys and stealing the car. It was driven to a house in Somerville where another car was stolen. Detective Thomson said police suspect the car was used to steal cigarettes from a Langwarrin liquor store before being set alight. A man police wish to speak with is of southern European appearance, about 173cm, aged 25-30 with a moustache and black hair with shaved sides. Anyone with information should call Crime Stoppers on 1800 333 000 or Detective Thomson on 9784 5555.

Cats for free thanks to RSPCA CATS are being given away free by the RSPCA from Thursday 14 April to Sunday 17 April. During these four days, RSPCA Victoria will be waiving its usual $110 cat adoption fee. The organisation has more than 200 adult cats at its nine adoption centres and two RSPCA Pets Place Centres. There are also cats waiting in quarantine (at least eight days before being ready for adoption). Every cat available for adoption is desexed, microchipped and vaccinated. RSPCA Kingston is at Petbarn, 27-29 Nepean Hwy, Mentone, call 9908 5181 or see rspcavic.org/adoptacat

One for the future: Thomas asked St Kilda FC player Luke Dunstan to sign his footy card for his collection when the Saints announced their return to Moorabbin Reserve last year. Picture: Gary Sissons

Return of the Saints edges closer REDEVELOPMENT of the Moorabbin Reserve is another step closer after Kingston Council at its latest council meeting gave permission for the St Kilda Football Club to begin the formal planning application process. As Kingston Council owns Moorabbin Reserve, its formal permission was required before a planning application could be lodged by St Kilda Football Club. “This permission does not mean Kingston Council has approved the application but rather allows the planning process to continue,” Kingston mayor Cr Tamsin Bearsley said. “The application will now be subject to the normal planning process, which will include seeking public feedback on the plan in coming months. The proposed Moorabbin Reserve redevelopment includes: n new administrative facilities for St Kilda Football Club and a community football hub with dedicated offices for the Southern Metropolitan Junior Football League, Southern Football Netball League, Sandringham Dragons and AFL Victoria region staff n a new social room facility with the ability to host meetings and events, including educational programs, seminars and courses

training facilities for Southern Metropolitan Junior Football League, Southern Football Netball League and the St Kilda Football Club; n the oval and associated facilities for use during for finals and other high-profile community-based games such as interleague, season launches and final series n a venue for VFL team training and matches including change rooms, umpire facilities and warm up n lighting to allow for training and potential community level night games n commercial activities including (the existing) 68 gaming machines, bar and café facilities n accessible public toilets n improved car parking. Separate to these proposed building works, Kingston Council has begun to develop a plan to improve the open space areas at the reserve with $1 million of council’s $5 million contribution to the project dedicated to park improvements. The remaining $4 million of council funding will go towards the cost of the community football hub and indoor training court, which will be available for public use for netball and basketball. n

with certain TOP-UP hearing aids incorporating the latest generation technology FREE OF CHARGE until the END OF MAY The choice is yours, either a discreet deep canal aid or a miniature receiver in canal aid. In both cases the aids will be small and discreet, and programmed to your specific hearing levels and unique personal needs. www.hiddenhearing.com.au