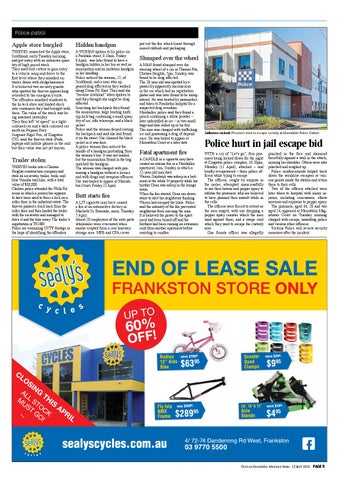 THIEVES ransacked the Apple store, Southland, early Tuesday morning, and got away with an unknown quantity of high priced stock. They used bolt cutters to gain entry to a vehicle ramp and drove to the first level where they smashed entrance doors with sledgehammers. It is believed two security guards who spotted the thieves approaching retreated to the emergency exits. The offenders smashed windows to the hi-tech store and loaded stock into containers they had brought with them. The value of the stock was being assessed yesterday. They then left “at speed” in a lightcoloured car and a dark coloured car north on Nepean Hwy. Sergeant Nigel Fox, of Kingston CIU, said the thieves stole iPads, laptops and mobile phones in the raid but their value was not yet known.

A WOMAN spoken to by police on a Parkdale street, 8.10am, Friday 8 April, was later found to have a handgun hidden in her bra as well as ammunition and an imitation handgun in her handbag. Police noticed the woman, 25, of Southbank, and a man who appeared drug affected as they walked along Como Pd. East. They said she “became irrational” when spoken to and they thought she might be drug affected. Searching her backpack they found the ammunition, large hunting knife, zip-lock bag containing a small quantity of ice, rifle telescope, and a black jacket. Police said the woman denied owning the backpack and said she had found it on the street. She claimed the black jacket in it was hers. A police woman then noticed the handle of a handgun protruding from the woman’s bra. It was not loaded, but the ammunition found in the bag matched the handgun. The woman was charged with possessing a handgun without a licence and with drugs and weapons offences. She was bailed to appear at Moorabbin Court, Friday 22 April.

Trailer stolen THIEVES broke into a Chelsea Heights construction company and stole an excavator, trailer, tools, and blue Yamaha trail bike, with a total value of $38,000. Chelsea police attended the Wells Rd scene in which a jemmy bar appears to have been used to force a lock on a roller door in the industrial estate. The thieves pushed a truck back from the roller door and then loaded the trailer with the excavator and managed to drive it and the bike away. The trailer’s registration is T92489. Police are examining CCTV footage in the hope of identifying the offenders.

Butt starts fire A LIT cigarette may have caused a fire at an automotive factory in Macbeth St, Braeside, noon, Tuesday 5 April. About 20 employees of the auto parts wholesaler were evacuated when smoke erupted from a rear laneway storage area. MFB and CFA crews

put out the fire which burnt through mixed rubbish and packaging.

Slumped over the wheel A MAN found slumped over the steering wheel of a car in Thames Pde, Chelsea Heights, 5pm, Sunday, was found to be drug affected. The 28 year old was spotted by a passer-by apparently unconscious in the car which had no registration plates and was later found to be unregistered. He was treated by paramedics and taken to Frankston hospital for a suspected drug overdose. Mordialloc police said they found a pouch containing a white powder – later indentified as ice – in two small bags and also rolled up in tin foil. The man was charged with trafficking ice and possessing a drug of dependence. He was bailed to appear at Moorabbin Court at a later date.

Fatal apartment fire A CANDLE or a cigarette may have caused an intense fire in a Mordialloc apartment, 1am, Sunday, in which a 52-year-old man died. Warren Zuijdwijk was asleep in a bedroom at the white St property while his brother Dean was asleep in the lounge room. When the fire started, Dean ran downstairs to alert his neighbours thinking Warren had escaped the blaze. Police said the intensity of the fire prevented neighbours from rescuing the man. It is believed the power to the apartment had been turned off and the brothers had been running an extension cord from another apartment before resorting to candles.

Police hurt in jail escape bid WITH a cry of “Let’s go”, four prisoners being locked down for the night at Kingston police complex, 10.20pm, Monday (11 April), attacked – and briefly overpowered – three police officers while trying to escape. The officers, caught by surprise in the melee, attempted unsuccessfully to use their batons and pepper spray to subdue the prisoners, who are believed to have planned their assault while in the cells. The officers were forced to retreat as the men surged, with one dropping a pepper spray canister which the men used against them, and a swipe card which they used to escape the custody area. One female officer was allegedly

punched in the face and slammed forcefully against a wall in the attack, injuring her shoulder. Others were also punched and roughed up. Police reinforcements helped track down the would-be escapees at various points inside the station and return them to their cells. Two of the officers attacked were later taken to hospital with minor injuries, including concussion, elbow soreness and exposure to pepper spray. The prisoners, aged 44, 28 and two aged 24, appeared at Moorabbin Magistrates Court on Tuesday morning charged with escape, assaulting police and various other offences. Victoria Police will review security measures after the incident.