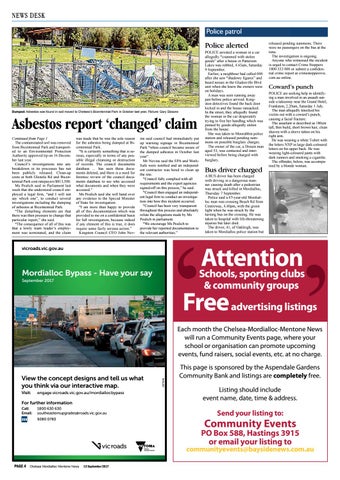 Asbestos report ‘changed’ claim Continued from Page 1 The contaminated soil was removed from Bicentennial Park and transported to an Environmental Protection Authority approved tip on 16 December last year. Council’s investigations into any breakdown in its processes has not been publicly released. Clean-up costs at both Glenola Rd and Bicentennial Park cost ratepayers $813,500. Ms Peulich said in Parliament last week that she understood council employed a legal firm, “and I will not say which one”, to conduct several investigations including the dumping of asbestos at Bicentennial Park. “The disturbing elements are that there was then pressure to change that particular report,” she said. “The consequence of all of this was that a lowly team leader’s employment was terminated, and the claim

was made that he was the sole reason for the asbestos being dumped at Bicentennial Park. “It is certainly something that is serious, especially in terms of any possible illegal cleansing or destruction of records. The council documents database … has seen these documents deleted, and there is a need for forensic review of the council documents database to see who accessed what documents and when they were accessed.” Ms Peulich said she will hand over any evidence to the Special Minister of State for investigation. “I am more than happy to provide all of this documentation which was provided to me on a confidential basis for full investigation, because indeed if any element of this is true, it does require some fairly serious action.” Kingston Council CEO John Nev-

ins said council had immediately put up warning signage in Bicentennial Park “when council became aware of the dumped asbestos in October last year”. Mr Nevins said the EPA and WorkSafe were notified and an independent contractor was hired to clean up the site. “Council fully complied with all requirements and the expert agencies signed-off on this process,” he said. “Council then engaged an independent legal firm to conduct an investigation into how this incident occurred. “Council has been very transparent throughout this process and absolutely refute the allegations made by Ms Peulich in parliament. “We encourage Ms Peulich to provide her reported documentation to the relevant authorities.”

POLICE arrested a woman in a car allegedly “crammed with stolen goods” after a house in Patterson Lakes was robbed, 4.45am, Saturday 9 September. Earlier, a neighbour had called 000 after she saw “shadowy figures” and heard noises in the Gladesville Blvd unit when she knew the owners were on holidays. A man was seen running away just before police arrived. Kingston detectives found the back door kicked in and the house ransacked. In the street, they allegedly found the woman in the car desperately trying to free her handbag which was pinned by goods allegedly stolen from the house. She was taken to Moorabbin police station and released pending summons on possible burglary charges. The owner of the car, a Drouin man aged 53, was contacted and interviewed before being charged with burglary.

released pending summons. There were no passengers on the bus at the time. The investigation is ongoing. Anyone who witnessed the incident is urged to contact Crime Stoppers 1800 333 000 or submit a confidential crime report at crimestoppersvic. com.au online.

Coward’s punch POLICE are seeking help in identifying a man involved in an assault outside a takeaway near the Grand Hotel, Frankston, 2.20am, Saturday 1 July. The man allegedly knocked his victim out with a coward’s punch, causing a facial fracture. The assailant is described as 180cm tall, thin build, short brown hair, clean shaven with a sleeve tattoo on his right arm. He was wearing a white T-shirt with the letters NXP in large dark-coloured letters on his upper back. He was wearing light-coloured pants with dark runners and smoking a cigarette. The offender, below, was accompanied by a blonde woman.

A BUS driver has been charged with driving in a dangerous manner causing death after a pedestrian was struck and killed in Mordialloc, Thursday 7 September. Police said a 67-year-old Mordialloc man was crossing Beach Rd from Centreway, 4.40pm, with the green light when he was struck by the turning bus on the crossing. He was taken to hospital with life-threatening injuries but later died. The driver, 41, of Oakleigh, was taken to Mordialloc police station but

Mordialloc Bypass - Have your say September 2017

Free advertising listings View the concept designs and tell us what you think via our interactive map. Visit:

Each month the Chelsea-Mordialloc-Mentone News will run a Community Events page, where your school or organisation can promote upcoming events, fund raisers, social events, etc. at no charge. This page is sponsored by the Aspendale Gardens Community Bank and listings are completely free. Listing should include event name, date, time &amp; address.