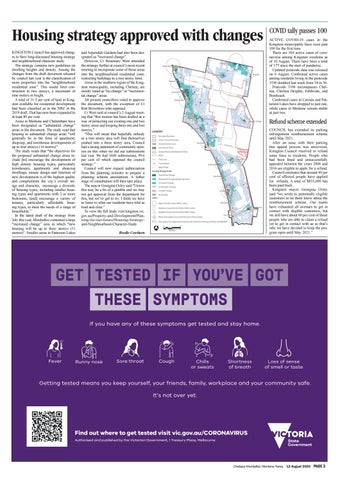 Housing strategy approved with changes KINGSTON Council has approved changes to their long-discussed housing strategy and neighbourhood character study. The strategy contains new guidelines on dwelling heights and density. Among the changes from the draft document released by council last year is the classification of more properties into the “neighbourhood residential zone”. This would limit construction to two storeys, a maximum of nine meters in height. A total of 51.3 per cent of land in Kingston available for residential development had been classified as in the NRZ in the 2019 draft. That has now been expanded to at least 80 per cent. Areas in Mentone and Cheltenham have been designated as “substantial change” areas in the document. The study read that housing in substantial change areas “will generally be in the form of apartment, shop-top, and townhouse developments of up to four storeys (14 metres)”. The study reads that “the objectives for the proposed substantial change areas include [to] encourage the development of high density housing types, particularly townhouses, apartments and shop-top dwellings, ensure design and function of new development is of the highest quality and complements the city’s overall image and character, encourage a diversity of housing types, including smaller housing types and apartments with 3 or more bedrooms, [and] encourage a variety of tenures, particularly affordable housing types, to meet the needs of a range of households.” In the latest draft of the strategy from July this year, Mordialloc contained a large “increased change” area in which “new housing will be up to three storeys (11 metres)”. Smaller areas in Patterson Lakes

and Aspendale Gardens had also been designated as “increased change”. However, Cr Rosemary West amended the strategy further at council’s most recent meeting to incorporate some of those areas into the neighbourhood residential zone, restricting buildings to a two storey limit. Areas in the southern region of the Kingston municipality, including Chelsea, are mostly listed as “no change” or “incremental change” areas. All present councillors voted to approve the document, with the exception of Cr Ron Brownlees who opposed. Cr West said at council’s 5 August meeting that “this motion has been drafted as a way of protecting our existing one and two storey areas and keeping them one and two storeys.” “This will mean that hopefully nobody in a two storey area will find themselves pushed into a three storey area. Council had a strong statement of community opinion on this when we did our submissions last year. We had 1600 submissions, 99.6 per cent of which opposed the council strategy.” Council will now request authorisation from the planning minister to prepare a planning scheme amendment. A futher stage of consultation will then take place. The mayor Georgina Oxley said “I know this may be a bit of a gamble and we may not get approval from the department for this, but we’ve got to try. I think we have to listen to what our residents have told us loud and clear.” To view the full study visit kingston.vic. gov.au/Property-and-Development/Planning-for-our-future/Housing-Strategyand-Neighbourhood-Character-Study

COVID tally passes 100 ACTIVE COVID-19 cases in the Kingston municipality have risen past 100 for the first time. There are 104 active cases of coronavirus among Kingston residents as of 10 August. There have been a total of 177 since the start of pandemic. Updated postcode data was released on 6 August. Confirmed active cases among residents living in the postcode 3196 doubled last week from 18 to 36. Postcode 3196 encompasses Chelsea, Chelsea Heights, Edithvale, and Bonbeach. Confirmed cases in Carrum and Patterson Lakes have dropped to just one, while cases in Mentone remain stable at just two.

Refund scheme extended COUNCIL has extended its parking infringement reimbursement scheme until May 2021. After an issue with their parking fine appeal process was uncovered, Kinsgton Council resolved to refund some fines to residents. People who had been fined and unsuccessfully appealed between the years 2006 and 2016 are eligible to apply for a refund. Council estimates that around 40 per cent of affected people have applied for refunds. A total of $855,000 has been paid back. Kingston mayor Georgina Oxley said “we wrote to potentially eligible customers to let them know about the reimbursement scheme. Our teams have exhausted all avenues to get in contact with eligible customers, but we still have about 60 per cent of those people who are able to claim a refund yet to get in contact with us so that’s why we have decided to keep the program open until May 2021.”

GET TESTED IF YOU’VE GOT THESE SYMPTOMS If you have any of these symptoms get tested and stay home.

Loss of sense of smell or taste

Getting tested means you keep yourself, your friends, family, workplace and your community safe. It’s not over yet.

Find out where to get tested visit vic.gov.au/CORONAVIRUS Authorised and published by the Victorian Government, 1 Treasury Place, Melbourne