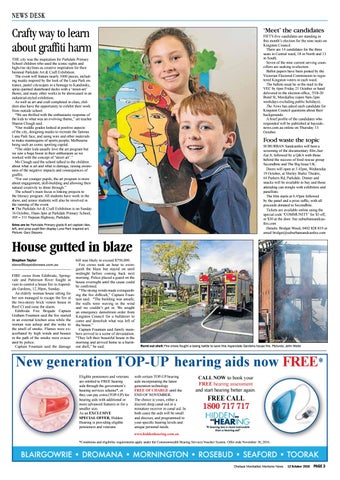 FIFTY-five candidates are standing in this month’s election for the nine seats on Kingston Council. There are 14 candidates for the three seats in Central ward, 18 in North and 13 in South. Seven of the nine current serving councillors are seeking re-election. Ballot papers have been posted by the Victorian Electoral Commission to registered Kingston voters in each ward. The ballots must be in the mail to the VEC by 6pm Friday 21 October or hand delivered to the election office, 7/18-20 Bond St, Mordialloc (open 9am-5pm weekdays excluding public holidays). The News has asked each candidate for Kingston Council questions about their backgrounds. A brief profile of the candidates who responded will be published at baysidenews.com.au online on Thursday 13 October.

THE city was the inspiration for Parkdale Primary School children who used the iconic sights and high-rise skylines as creative inspiration for their biennial Parkdale Art &amp; Craft Exhibition. The event will feature nearly 1000 pieces, including masks inspired by the look of the Luna Park entrance, pastel cityscapes in a homage to Kandinsky, spray-painted skateboard decks with a ‘street-art’ theme, and many other works to be showcased in an industrial-styled exhibition. As well as art and craft completed in class, children also have the opportunity to exhibit their work from outside school. “We are thrilled with the enthusiastic response of the kids to what was an evolving theme,” art teacher Sharon Clough said. “Our middle grades looked at positive aspects of the city, designing masks to recreate the famous Luna Park face, and using wire and other materials to make mannequins of sports people; Melbourne being such an iconic sporting capital. “The older kids usually love the art program but we saw a huge boost in their enthusiasm as we worked with the concept of ‘street art’.” Ms Clough said the school talked to the children about what is art and what is damage, raising awareness of the negative impacts and consequences of graffiti. “For our younger pupils, the art program is more about engagement, skill-building and allowing their natural creativity to shine through.” The school’s main focus is linking projects to the literacy program. All students have work in the show, and senior students will also be involved in the running of the event. n The Parkdale Art &amp; Craft Exhibition is on Sunday 16 October, 10am-3pm at Parkdale Primary School, 305 – 311 Nepean Highway, Parkdale.

Food waste the topic SUBURBAN Sandcastles will host a screening of the documentary film Just Eat It, followed by a Q&amp;A with those behind the success of food rescue group Secondbite and The Big Issue UK. Doors will open at 5.45pm, Wednesday 19 October, at Shirley Burke Theatre, 64 Parkers Rd, Parkdale. Dinner and snacks will be available to buy and those attending can mingle with exhibitors and panellists. The film starts at 6.45pm followed by the panel and a prize raffle, with all proceeds donated to Secondbite. Tickets are available online using the special code ‘COMMUNITY’ for $5 off, or $30 at the door. See suburbansandcastles.com Details: Bridget Wood, 0402 828 819 or email bridget@suburbansandcastles.com

House gutted in blaze Stephen Taylor steve@baysidenews.com.au FIRE crews from Edithvale, Springvale and Patterson River fought in vain to control a house fire in Aspendale Gardens, 12.30pm, Sunday. An elderly woman house sitting for her son managed to escape the fire at the two-storey brick veneer house in Reef Ct and raise the alarm. Edithvale Fire Brigade Captain Graham Fountain said the fire started in an external kitchen area while the woman was asleep and she woke to the smell of smoke. Flames were exacerbated by high winds and houses in the path of the smoke were evacuated by police. Captain Fountain said the damage

bill was likely to exceed $750,000. Fire crews took an hour to extinguish the blaze but stayed on until midnight before coming back next morning. Police placed a guard on the house overnight until the cause could be confirmed. “The strong winds made extinguishing the fire difficult,” Captain Fountain said. “The building was unsafe; the walls were waving in the wind and we couldn’t get in. We sought an emergency demolition order from Kingston Council for a bulldozer to come and demolish what was left of the house.” Captain Fountain said family members arrived to a scene of devastation. “They left their beautiful house in the morning and arrived home to a burntout shell,” he said.

with certain TOP-UP hearing aids incorporating the latest generation technology FREE OF CHARGE until the END OF NOVEMBER. The choice is yours, either a discreet deep canal aid or a miniature receiver in canal aid. In both cases the aids will be small and discreet, and programmed to your specific hearing levels and unique personal needs. www.hiddenhearing.com.au