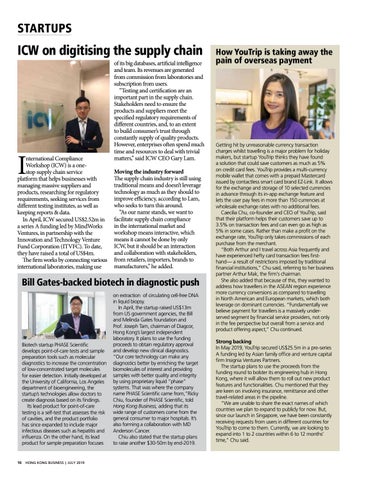 ICW on digitising the supply chain

nternational Compliance Workshop (ICW) is a onestop supply chain service platform that helps businesses with managing massive suppliers and products, researching for regulatory requirements, seeking services from different testing institutes, as well as keeping reports & data. In April, ICW secured US$2.52m in a series A funding led by MindWorks Ventures, in partnership with the Innovation and Technology Venture Fund Corporation (ITVFC). To date, they have raised a total of US$4m. The firm works by connecting various international laboratories, making use

of its big databases, artificial intelligence and team. Its revenues are generated from commission from laboratories and subscription from users. “Testing and certification are an important part in the supply chain. Stakeholders need to ensure the products and suppliers meet the specified regulatory requirements of different countries, and, to an extent to build consumer’s trust through constantly supply of quality products. However, enterprises often spend much time and resources to deal with trivial matters,” said ICW CEO Gary Lam. Moving the industry forward The supply chain industry is still using traditional means and doesn’t leverage technology as much as they should to improve efficiency, according to Lam, who seeks to turn this around. “As our name stands, we want to facilitate supply chain compliance in the international market and workshop means interactive, which means it cannot be done by only ICW, but it should be an interaction and collaboration with stakeholders, from retailers, importers, brands to manufacturers,” he added.

Biotech startup PHASE Scientific develops point-of-care tests and sample preparation tools such as molecular diagnostics to increase the concentration of low-concentrated target molecules for easier detection. Initially developed at the University of California, Los Angeles department of bioengineering, the startup’s technologies allow doctors to create diagnosis based on its findings. Its lead product for point-of-care testing is a self-test that assesses the risk of cavities, and the product portfolio has since expanded to include major infectious diseases such as hepatitis and influenza. On the other hand, its lead product for sample preparation focuses

on extraction of circulating cell-free DNA in liquid biopsy. In April, the startup raised US$13m from US government agencies, the Bill and Melinda Gates foundation and Prof. Joseph Tam, chairman of Diagcor, Hong Kong’s largest independent laboratory. It plans to use the funding proceeds to obtain regulatory approval and develop new clinical diagnostics. “Our core technology can make any diagnostics better by enriching the target biomolecules of interest and providing samples with better quality and integrity by using proprietary liquid “phase” systems. That was where the company name PHASE Scientific came from,”Ricky Chiu, founder of PHASE Scientific, told Hong Kong Business, adding that its wide range of customers come from the general consumer to major hospitals. It’s also forming a collaboration with MD Anderson Cancer. Chiu also stated that the startup plans to raise another $30-50m by end-2019.

How YouTrip is taking away the pain of overseas payment

Getting hit by unreasonable currency transaction charges whilst travelling is a major problem for holiday makers, but startup YouTrip thinks they have found a solution that could save customers as much as 5% on credit card fees. YouTrip provides a multi-currency mobile wallet that comes with a prepaid Mastercard issued by contactless smart card brand EZ-Link. It allows for the exchange and storage of 10 selected currencies in advance through its in-app exchange feature and lets the user pay fees in more than 150 currencies at wholesale exchange rates with no additional fees. Caecilia Chu, co-founder and CEO of YouTrip, said that their platform helps their customers save up to 3.5% on transaction fees and can even go as high as 5% in some cases. Rather than make a profit on the exchange rate, YouTrip only takes commissions of each purchase from the merchant. “Both Arthur and I travel across Asia frequently and have experienced hefty card transaction fees firsthand— a result of restrictions imposed by traditional financial institutions,” Chu said, referring to her business partner Arthur Mak, the firm’s chairman. She also added that because of this, they wanted to address how travellers in the ASEAN region experience more currency conversions as compared to travelling in North American and European markets, which both leverage on dominant currencies. “Fundamentally we believe payment for travellers is a massively underserved segment by financial service providers, not only in the fee perspective but overall from a service and product offering aspect,” Chu continued. Strong backing In May 2019, YouTrip secured US$25.5m in a pre-series A funding led by Asian family office and venture capital firm Insignia Ventures Partners. The startup plans to use the proceeds from the funding round to bolster its engineering hub in Hong Kong, where it will allow them to roll out new product features and functionalities. Chu mentioned that they are keen on involving insurance, remittance and other travel-related areas in the pipeline. “We are unable to share the exact names of which countries we plan to expand to publicly for now. But, since our launch in Singapore, we have been constantly receiving requests from users in different countries for YouTrip to come to them. Currently, we are looking to expand into 1 to 2 countries within 6 to 12 months’ time,” Chu said. 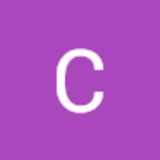