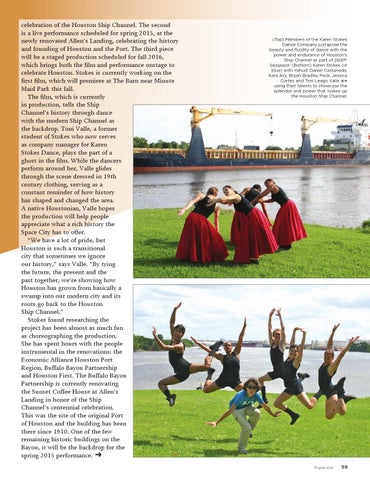 celebration of the Houston Ship Channel. The second is a live performance scheduled for spring 2015, at the newly renovated Allen’s Landing, celebrating the history and founding of Houston and the Port. The third piece will be a staged production scheduled for fall 2016, which brings both the film and performance onstage to celebrate Houston. Stokes is currently working on the first film, which will premiere at The Barn near Minute Maid Park this fall. The film, which is currently in production, tells the Ship Channel’s history through dance with the modern Ship Channel as the backdrop. Toni Valle, a former student of Stokes who now serves as company manager for Karen Stokes Dance, plays the part of a ghost in the film. While the dancers perform around her, Valle glides through the scene dressed in 19th century clothing, serving as a constant reminder of how history has shaped and changed the area. A native Houstonian, Valle hopes the production will help people appreciate what a rich history the Space City has to offer. “We have a lot of pride, but Houston is such a transitional city that sometimes we ignore our history,” says Valle. “By tying the future, the present and the past together, we’re showing how Houston has grown from basically a swamp into our modern city and its roots go back to the Houston Ship Channel.” Stokes found researching the project has been almost as much fun as choreographing the production. She has spent hours with the people instrumental in the renovations: the Economic Alliance Houston Port Region, Buffalo Bayou Partnership and Houston First. The Buffalo Bayou Partnership is currently renovating the Sunset Coffee House at Allen’s Landing in honor of the Ship Channel’s centennial celebration. This was the site of the original Port of Houston and the building has been there since 1910. One of the few remaining historic buildings on the Bayou, it will be the backdrop for the spring 2015 performance. ➜

(Top) Members of the Karen Stokes Dance Company juxtapose the beauty and fluidity of dance with the power and endurance of Houston’s Ship Channel as part of DEEP: Seaspace. (Bottom) Karen Stokes (in blue) with Yahudi Daniel Castaneda, Kara Ary, Bryan Bradley Peck, Jessica Cortez and Toni Leago Valle are using their talents to showcase the splendor and power that makes up the Houston Ship Channel. 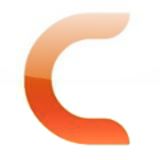