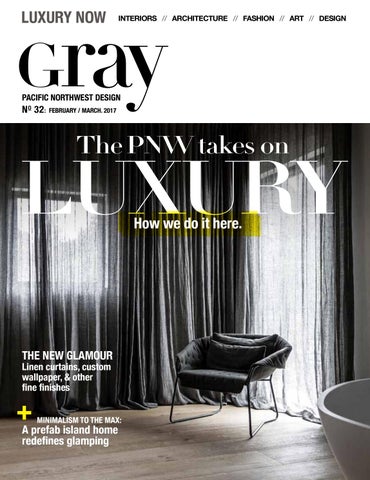 The PNW takes on

LUXURY How we do it here.

MINIMALISM TO THE MAX:

To heed height restrictions while taking advantage of west-facing views of the ocean and Point Grey lighthouse, residential designer Craig Chevalier stretched this West Vancouver house horizontally, placing the most-used public spaces—kitchen, living room, office, great room—as well as the master and two spare bedrooms on the main level. Resident and designer Rachelle Chambers stands in the dining room with her Weimaraner, Avia. OPPOSITE: The residents’ 1959 Mercedes 300D Adenauer sits at the ready in a custom Indianalimestone garage. »

THE CAR STAYS IN THE PICTURE

Chambers filled her home with neutral tones (grays, browns, and tans) inspired by the rocks, driftwood, and mussel shells of the nearby shoreline. A custom limestone fireplace and feature walls introduce texture that prevents the living room’s restricted palette from falling flat. The sectional sofa from Van Gogh Designs has proven durable against dog claws. Kolbe windows let in a hint of palette-complementing green. The flooring is porcelain tile from Ames Tile &amp; Stone. Dark millwork around the TV ensures the screen isn’t the focal point of the room and provides plenty of extra storage.

ALL HOUSES ARE BUILT AROUND A SET OF CONSTRAINTS—lot size, budget, height restrictions— but once in a while, a unique challenge throws even the most seasoned designer for a loop. For North Vancouver custom home designer Craig Chevalier, it was a car. After 28 years in the business, Chevalier was used to requests for swimming pools and upsized rooms. But when local artist and designer Rachelle Chambers and her partner asked him to integrate their rare 1959 Mercedes 300D Adenauer into the design of their new West Vancouver home, Chevalier was initially stumped.

“I went in blind. I never saw the car—not even in pictures— until they moved in,” he says. The designer solved the puzzle by creating a custom garage with limestone-andglass walls that permit views of the vehicle (which originally belonged to the wife of the owner of Campbell’s Soup) from the living room and entry hall. “I love the end result,” says Chevalier. “It’s super sexy.” The scheme satisfied the residents, too. “My partner is German and always dreamed of having this particular Mercedes,” says Chambers, cofounder of Chambers &amp; Stark Design Studio. “He wanted it in the living room, but I had to put my foot down on that one.” »

LEFT: Rather than tuck away their prized Mercedes, Chambers and her partner opted to visibly integrate it into the design of the house. TOP: In the kitchen, dark oak cabinetry and a cantilevered ceiling panel contrast with the whitewashed oak-andCaesarstone island, updating Chambers’s favored midcentury style. “Many midcentury spaces used two woods—one stained or painted black, and the other a natural oak, maple, or walnut color,” she notes. “I wanted to tie in the millwork from the adjacent hall to draw you into the kitchen and make it feel grand.” Classicon Selene Copper pendants add understated glitz. OPPOSITE: A smoked-glass Modo chandelier from Roll &amp; Hill, sourced from LightForm, crowns the Bensen dining table, while an acrylic painting by Chambers hangs on the back wall. »

“I don’t like living with a lot of color. find a na ral palette very soothing.” RACHELLE CHAMBERS, DESIGNER

An acrylic painting by Chambers, installed on a stair landing, was inspired by the texture of tree bark. OPPOSITE, CLOCKWISE FROM TOP LEFT: In the powder

room, Mare Bianco marble with a slightly brushed finish, sourced through Ames Tile &amp; Stone, is set in a herringbone pattern. The vanity is white oak stained to match the cabinetry in the kitchen (Sage Cabinetry crafted both). The sink is Duravit, and the faucets are from Blu Bathworks. In the master bedroom, the custom headboard with floating nightstands was designed by Chambers and fabricated by Sage. Chambers also created and installed the artwork above the bed. “I wanted something light in color and feeling,” she says of the piece, which is made from yarn dipped in paint and papier-mâché. “It’s meant to resemble a sort of wacky nest.” A replica midcentury chair provides a warm perch by the Kozy Heat fireplace.