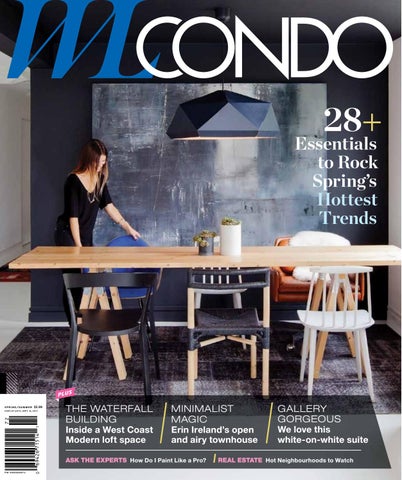 We love this white-on-white suite

Wall to Wall Knocking out a bedroom wall created a wide-open layout for the living space, which allows even more light to flow through the corner unit. An Ikea Karlstad sofa spans a pair of heirloom rugs, handed down from the homeowners’ respective grandmothers.

Blank Canvas Two designers create a whiteon-white space that’s part dream home, part gallery of treasures. Though Vanessa Stark and Misha Olynyk graduated from art school years ago, there’s still a hint of their past lives here in their Mount Pleasant condo. “We took a bit of a gallery approach,” laughs Stark, who today is co-owner and interior designer for Chambers and Stark. (Olynyk is in the design world too, crafting custom woodwork pieces.) Almost every wall in their 1,100-square-foot space is painted white, with the intention of showcasing the handmade pottery, vintage armchairs and heirloom rugs that the couple has carefully curated throughout their lives. But when they moved in three years ago, the suite wasn’t quite the blank canvas they were looking for: a little remodelling was in order. The space had a unique, long-format layout, with a long, dark hallway that led into the living room—but the floor plan actually offered a rare opportunity to open things up. “You don’t often have a chance to knock out a wall and make a large living space especially in Vancouver, where you’re usually pinching inches,” says Stark. She and Olynyk took down a bedroom WESTERN LIVING CONDO Spring/Summer 2017

Custom Content The simple pine dining room table (bottom right) was actually built on-site during the renovation to be used as a work table, but the couple decided to keep it for everyday use. The painting is by Olynyk’s father, Markian Olynyk.

wall to make room for a dining nook and replaced an office door with an oak-framed sliding glass wall. Now natural light flows easily through the oversized living area. “I walk down the long hallway and it’s so bright and light. I feel like I can get on the floor and stretch and think and breathe,” says Stark. That light and airy feeling is due also to the whitepainted floors, which amplify the light and double-down

on the gallery look. (“At the moment we don’t have kids, so it was a good opportunity for us to go for it without worrying about it getting messed up,” laughs Stark.) And though the white-on-white is striking, the condo is anything but cold. Light wood elements throughout soften up the vibe, as do the well-worn treasured objects on display. “If you love things you own, those things are going to warm your place up,” says Stark. “We wanted everything 68

in our home to be something that means something to us—whether that’s something we created, something we inherited or something we collected.” There are prime examples in every room. That wicker chair in the corner of the living room? It’s one of a pair they discovered at an L.A. flea market during a road trip across the U.S. (“We shoved it in the car and drove around with it for a month,” says Stark with a smile); underneath the sofa

Office Space In the sunny home office, Olynyk and Stark line the windows with their book collection, and save the shelves for displaying beloved ceramic designs. A duo of chairs line the double-wide desk.

lie overlapping vintage rugs from Olynyk’s and Stark’s respective grandmothers. In the office, Olynyk crafted a custom modular pegand-dowel shelving unit out of extra wood from his workshop to display ceramic work from their art-school days alongside family photos. But the couple decided against built-in storage in the living room—the light from the window was just too nice to obscure with surrounding

bookshelves. Instead, they brought in a bench and now stow their large collection of design tomes underneath. “We’re always pulling out magazines and books for references, so we didn’t want to put them out of sight,” explains Stark. “We thought, let’s make it simple and see how we live.” On the opposite wall, an extra-long credenza built by Olynyk takes advantage of the room’s length and provides a space to hide away items that aren’t as display-worthy. WESTERN LIVING CONDO Spring/Summer 2017

The black window frames bring some contrast and depth to the look, but it’s the dining nook, with the wall, ceiling and bulkhead painted a deep navy blue, that truly stands out. “With so much white, if you don’t have pops of dark, you stop noticing how much white there is,” says Stark. Though Olynyk and Stark originally had struggled with what to do with the bulkhead, the intimate nook has become a beloved element of the design. And the 70

mismatched chairs—a wishbone design sidles up along an Ikea number—around a custom-built pine table built by Olynyk make for a cozy, casual space for leisurely family dinners. “They’re in constant rotation,” says Olynyk. “Every chair has a story, and the combination is never set in stone.” Stark calls the look a compromise—“We don’t have exactly the same taste,” she says—but this compromise looks an awful lot like a work of art.

The Little Things Mismatched wooden side tables (one a gift from a client, the other inherited), a nubby rug sourced in L.A. and a pair of blown-up photos (from photographers Kevin Russ and Luke Gram) add personal touches to the space.