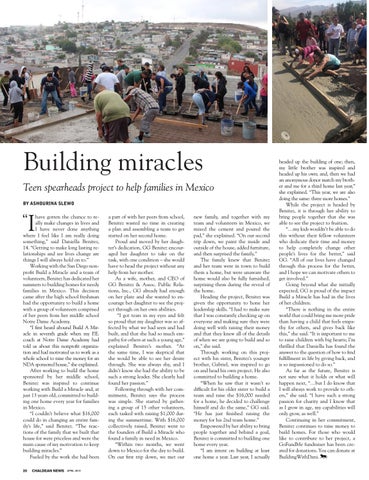 have gotten the chance to really make changes in lives and I have never done anything where I feel like I am really doing something,” said Daniella Benitez, 14. “Getting to make long lasting relationships and see lives change are things I will always hold on to.” Working with the San Diego nonprofit Build a Miracle and a team of volunteers, Benitez has dedicated her summers to building homes for needy families in Mexico. This decision came after the high school freshman had the opportunity to build a home with a group of volunteers comprised of her peers from her middle school Notre Dame Academy. “I first heard abound Build A Miracle in seventh grade when my P.E. coach at Notre Dame Academy had told us about this nonprofit organization and had motivated us to work as a whole school to raise the money for an NDA sponsored house,” she explained. After working to build the home sponsored by her middle school, Benitez was inspired to continue working with Build a Miracle and, at just 13 years old, committed to building one home every year for families in Mexico. “I couldn’t believe what $16,000 could do in changing an entire family’s life,” said Benitez. “The reactions of the family that we built that house for were priceless and were the main cause of my motivation to keep building miracles.” Fueled by the work she had been 20

a part of with her peers from school, Benitez wasted no time in creating a plan and assembling a team to get started on her second home. Proud and moved by her daughter’s dedication, GG Benitez encouraged her daughter to take on the task, with one condition – she would have to head the project without any help from her mother. As a wife, mother, and CEO of GG Benitez &amp; Assoc. Public Relations, Inc., GG already had enough on her plate and she wanted to encourage her daughter to see the project through on her own abilities. “I got tears in my eyes and felt so proud that my daughter was so affected by what we had seen and had built, and that she had so much empathy for others at such a young age,” explained Benitez’s mother. “At the same time, I was skeptical that she would be able to see her desire through. She was always shy, and I didn’t know she had the ability to be such a strong leader. She clearly had found her passion.” Following through with her commitment, Benitez says the process was simple. She started by gathering a group of 15 other volunteers, each tasked with raising $1,000 during the summertime. With $16,000 collectively raised, Benitez went to the founders of Build a Miracle who found a family in need in Mexico. “Within two months, we went down to Mexico for the day to build. On our first trip down, we met our

new family, and together with my team and volunteers in Mexico, we mixed the cement and poured the pad,” she explained. “On our second trip down, we paint the inside and outside of the house, added furniture, and then surprised the family.” The family knew that Benitez and her team were in town to build them a home, but were unaware the home would also be fully furnished, surprising them during the reveal of the home. Heading the project, Benitez was given the opportunity to hone her leadership skills. “I had to make sure that I was constantly checking up on everyone and making sure they were doing well with raising their money and that they knew all of the details of when we are going to build and so on,” she said. Through working on this project with his sister, Benitez’s younger brother, Gabriel, was inspired to go on and head his own project. He also committed to building a home. “When he saw that it wasn’t so difficult for his older sister to build a team and raise the $16,000 needed for a home, he decided to challenge himself and do the same,” GG said. “He has just finished raising the money for his 2nd team home.” Empowered by her ability to bring people together and behind a goal, Benitez is committed to building one home every year. “I am intent on building at least one home a year. Last year, I actually

headed up the building of one; then, my little brother was inspired and headed up his own; and, then we had an anonymous donor match my brother and me for a third home last year,” she explained. “This year, we are also doing the same: three more homes.” While the project is headed by Benitez, it is through her ability to bring people together that she was able to see the project to fruition. “…my kids wouldn’t be able to do this without their fellow volunteers who dedicate their time and money to help completely change other people’s lives for the better,” said GG. “All of our lives have changed through this process for the better, and I hope we can motivate others to get involved.” Going beyond what she initially expected, GG is proud of the impact Build a Miracle has had in the lives of her children. “There is nothing in the entire world that could bring me more pride than having a child that feels empathy for others, and gives back like this,” she said. “It is important to me to raise children with big hearts; I’m thrilled that Daniella has found the answer to the question of how to find fulfillment in life by giving back, and is so impassioned to do so.” As far as the future, Benitez is not sure what it holds or what will happen next, “…but I do know that I will always work to provide to others,” she said. “I have such a strong passion for charity and I know that as I grow in age, my capabilities will only grow, as well.” Continuing in her commitment, Benitez continues to raise money to build homes. For those who would like to contribute to her project, a GoFundMe fundraiser has been created for donations. You can donate at BuildingWithDani.