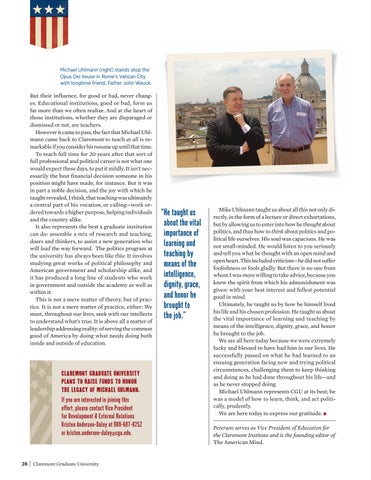 But their influence, for good or bad, never changes. Educational institutions, good or bad, form us far more than we often realize. And at the heart of those institutions, whether they are disparaged or dismissed or not, are teachers. However it came to pass, the fact that Michael Uhlmann came back to Claremont to teach at all is remarkable if you consider his resume up until that time. To teach full time for 20 years after that sort of full professional and political career is not what one would expect these days, to put it mildly. It isn’t necessarily the best financial decision someone in his position might have made, for instance. But it was in part a noble decision, and the joy with which he taught revealed, I think, that teaching was ultimately a central part of his vocation, or calling—work ordered towards a higher purpose, helping individuals and the country alike. It also represents the best a graduate institution can do: assemble a mix of research and teaching, doers and thinkers, to assist a new generation who will lead the way forward. The politics program at the university has always been like this: It involves studying great works of political philosophy and American government and scholarship alike, and it has produced a long line of students who work in government and outside the academy as well as within it. This is not a mere matter of theory, but of practice. It is not a mere matter of practice, either: We must, throughout our lives, seek with our intellects to understand what’s true. It is above all a matter of leadership addressing reality: of serving the common good of America by doing what needs doing both inside and outside of education.

If you are interested in joining this effort, please contact Vice President for Development &amp; External Relations Kristen Andersen-Daley at 909-607-8252 or kristen.andersen-daley@cgu.edu.

“ He taught us about the vital importance of learning and teaching by means of the intelligence, dignity, grace, and honor he brought to the job.”

Mike Uhlmann taught us about all this not only directly, in the form of a lecture or direct exhortations, but by allowing us to enter into how he thought about politics, and thus how to think about politics and political life ourselves. His soul was capacious. He was not small-minded. He would listen to you seriously and tell you what he thought with an open mind and open heart. This included criticism—he did not suffer foolishness or fools gladly. But there is no one from whom I was more willing to take advice, because you knew the spirit from which his admonishment was given: with your best interest and fullest potential good in mind. Ultimately, he taught us by how he himself lived his life and his chosen profession. He taught us about the vital importance of learning and teaching by means of the intelligence, dignity, grace, and honor he brought to the job. We are all here today because we were extremely lucky and blessed to have had him in our lives. He successfully passed on what he had learned to an ensuing generation facing new and trying political circumstances, challenging them to keep thinking and doing as he had done throughout his life—and as he never stopped doing. Michael Uhlmann represents CGU at its best; he was a model of how to learn, think, and act politically, prudently. We are here today to express our gratitude. l Peterson serves as Vice President of Education for the Claremont Institute and is the founding editor of The American Mind.

The Flame is the magazine of Claremont Graduate University.