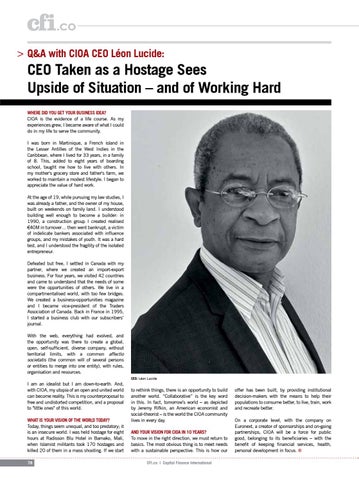 CEO Taken as a Hostage Sees Upside of Situation – and of Working Hard WHERE DID YOU GET YOUR BUSINESS IDEA? CIOA is the evidence of a life course. As my experiences grew, I became aware of what I could do in my life to serve the community. I was born in Martinique, a French island in the Lesser Antilles of the West Indies in the Caribbean, where I lived for 33 years, in a family of 8. This, added to eight years of boarding school, taught me how to live with others. In my mother's grocery store and father's farm, we worked to maintain a modest lifestyle. I began to appreciate the value of hard work. At the age of 19, while pursuing my law studies, I was already a father, and the owner of my house, built on weekends on family land. I understood building well enough to become a builder: in 1990, a construction group I created realised €40M in turnover… then went bankrupt, a victim of indelicate bankers associated with influence groups, and my mistakes of youth. It was a hard test, and I understood the fragility of the isolated entrepreneur. Defeated but free, I settled in Canada with my partner, where we created an import-export business. For four years, we visited 42 countries and came to understand that the needs of some were the opportunities of others. We live in a compartmentalised world, with too few bridges. We created a business-opportunities magazine and I became vice-president of the Traders Association of Canada. Back in France in 1995, I started a business club with our subscribers’ journal. With the web, everything had evolved, and the opportunity was there to create a global, open, self-sufficient, diverse company, without territorial limits, with a common affectio societatis (the common will of several persons or entities to merge into one entity), with rules, organisation and resources. CEO: Léon Lucide

I am an idealist but I am down-to-earth. And, with CIOA, my utopia of an open and united world can become reality. This is my counterproposal to free and undistorted competition, and a proposal to "little ones" of this world. WHAT IS YOUR VISION OF THE WORLD TODAY? Today, things seem unequal, and too predatory; it is an insecure world. I was held hostage for eight hours at Radisson Blu Hotel in Bamako, Mali, when Islamist militants took 170 hostages and killed 20 of them in a mass shooting. If we start 78

to rethink things, there is an opportunity to build another world. “Collaborative” is the key word in this. In fact, tomorrow’s world – as depicted by Jeremy Rifkin, an American economist and social-theorist – is the world the CIOA community lives in every day. AND YOUR VISION FOR CIOA IN 10 YEARS? To move in the right direction, we must return to basics. The most obvious thing is to meet needs with a sustainable perspective. This is how our CFI.co | Capital Finance International

offer has been built, by providing institutional decision-makers with the means to help their populations to consume better, to live, train, work and recreate better. On a corporate level, with the company on Euronext, a creator of sponsorships and on-going partnerships, CIOA will be a force for public good, belonging to its beneficiaries – with the benefit of keeping financial services, health, personal development in focus. i