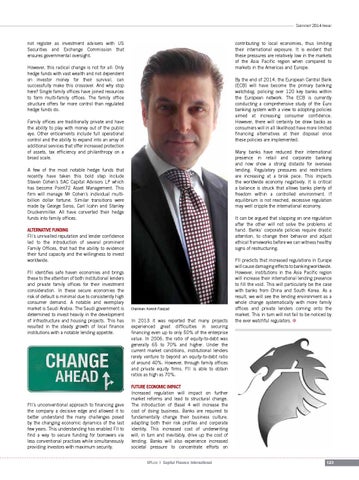 not register as investment advisers with US Securities and Exchange Commission that ensures governmental oversight.

contributing to local economies, thus limiting their international exposure. It is evident that these pressures are relatively low in the markets of the Asia Pacific region when compared to markets in the Americas and Europe.

However, this radical change is not for all: Only hedge funds with vast wealth and not dependent on investor money for their survival, can successfully make this crossover. And why stop here? Single family offices have joined resources to form multi-family offices. The family office structure offers far more control than regulated hedge funds do.

By the end of 2014, the European Central Bank (ECB) will have become the primary banking watchdog, policing over 120 key banks within the European network. The ECB is currently conducting a comprehensive study of the Euro banking system with a view to adopting policies aimed at increasing consumer confidence. However, there will certainly be draw backs as consumers will in all likelihood have more limited financing alternatives at their disposal once these policies are implemented.

Family offices are traditionally private and have the ability to play with money out of the public eye. Other enticements include full operational control and the ability to expand into an array of additional services that offer increased protection of assets, tax efficiency and philanthropy on a broad scale.

Many banks have reduced their international presence in retail and corporate banking and now show a strong distaste for overseas lending. Regulatory pressures and restrictions are increasing at a brisk pace. This impacts the worldwide economy negatively. It is critical a balance is struck that allows banks plenty of freedom within a controlled environment. If equilibrium is not reached, excessive regulation may well cripple the international economy.

A few of the most notable hedge funds that recently have taken this bold step include Steven Cohen’s SAC Capital Advisors LP which has become Point72 Asset Management. This firm will manage Mr Cohen’s individual multibillion dollar fortune. Similar transitions were made by George Soros, Carl Icahn and Stanley Druckenmiller. All have converted their hedge funds into family offices.

It can be argued that slapping on one regulation after the other will not solve the problems at hand. Banks’ corporate policies require drastic attention, to change their behavior and adjust ethical frameworks before we can witness healthy signs of restructuring.

ALTERNATIVE FUNDING FII’s unrivalled reputation and lender confidence led to the introduction of several prominent Family Offices, that had the ability to evidence their fund capacity and the willingness to invest worldwide. FII identifies safe haven economies and brings these to the attention of both institutional lenders and private family offices for their investment consideration. In these secure economies the risk of default is minimal due to consistently high consumer demand. A notable and exemplary market is Saudi Arabia. The Saudi government is determined to invest heavily in the development of infrastructure and housing projects. This has resulted in the steady growth of local finance institutions with a notable lending appetite.

FII’s unconventional approach to financing gave the company a decisive edge and allowed it to better understand the many challenges posed by the changing economic dynamics of the last few years. This understanding has enabled FII to find a way to secure funding for borrowers via less conventional practises while simultaneously providing investors with maximum security.

In 2013 it was reported that many projects experienced great difficulties in securing financing even up to only 50% of the enterprise value. In 2006, the ratio of equity-to-debt was generally 65 to 70% and higher. Under the current market conditions, institutional lenders rarely venture to beyond an equity-to-debt ratio of around 40%. However, through family offices and private equity firms, FII is able to obtain ratios as high as 70%.

FII predicts that increased regulations in Europe will cause damaging effects to banking worldwide. However, institutions in the Asia Pacific region will increase their international lending presence to fill the void. This will particularly be the case with banks from China and South Korea. As a result, we will see the lending environment as a whole change systematically with more family offices and private lenders coming onto the market. This in turn will not fail to be noticed by the ever watchful regulators. i

FUTURE ECONOMIC IMPACT Increased regulation will impact on further market reforms and lead to structural change. The introduction of Basel 4 will increase the cost of doing business. Banks are required to fundamentally change their business culture, adapting both their risk profiles and corporate identity. This increased cost of underwriting will, in turn and inevitably, drive up the cost of lending. Banks will also experience increased societal pressure to concentrate efforts on CFI.co | Capital Finance International