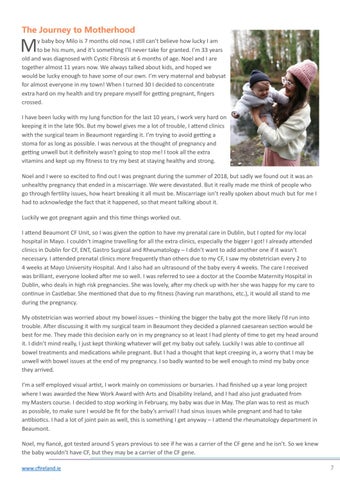 The Journey to Motherhood

y baby boy Milo is 7 months old now, I still can’t believe how lucky I am to be his mum, and it’s something I’ll never take for granted. I’m 33 years old and was diagnosed with Cystic Fibrosis at 6 months of age. Noel and I are together almost 11 years now. We always talked about kids, and hoped we would be lucky enough to have some of our own. I’m very maternal and babysat for almost everyone in my town! When I turned 30 I decided to concentrate extra hard on my health and try prepare myself for getting pregnant, fingers crossed. I have been lucky with my lung function for the last 10 years, I work very hard on keeping it in the late 90s. But my bowel gives me a lot of trouble, I attend clinics with the surgical team in Beaumont regarding it. I’m trying to avoid getting a stoma for as long as possible. I was nervous at the thought of pregnancy and getting unwell but it definitely wasn’t going to stop me! I took all the extra vitamins and kept up my fitness to try my best at staying healthy and strong. Noel and I were so excited to find out I was pregnant during the summer of 2018, but sadly we found out it was an unhealthy pregnancy that ended in a miscarriage. We were devastated. But it really made me think of people who go through fertility issues, how heart breaking it all must be. Miscarriage isn’t really spoken about much but for me I had to acknowledge the fact that it happened, so that meant talking about it. Luckily we got pregnant again and this time things worked out. I attend Beaumont CF Unit, so I was given the option to have my prenatal care in Dublin, but I opted for my local hospital in Mayo. I couldn’t imagine travelling for all the extra clinics, especially the bigger I got! I already attended clinics in Dublin for CF, ENT, Gastro Surgical and Rheumatology – I didn’t want to add another one if it wasn’t necessary. I attended prenatal clinics more frequently than others due to my CF, I saw my obstetrician every 2 to 4 weeks at Mayo University Hospital. And I also had an ultrasound of the baby every 4 weeks. The care I received was brilliant, everyone looked after me so well. I was referred to see a doctor at the Coombe Maternity Hospital in Dublin, who deals in high risk pregnancies. She was lovely, after my check up with her she was happy for my care to continue in Castlebar. She mentioned that due to my fitness (having run marathons, etc.), it would all stand to me during the pregnancy. My obstetrician was worried about my bowel issues – thinking the bigger the baby got the more likely I’d run into trouble. After discussing it with my surgical team in Beaumont they decided a planned caesarean section would be best for me. They made this decision early on in my pregnancy so at least I had plenty of time to get my head around it. I didn’t mind really, I just kept thinking whatever will get my baby out safely. Luckily I was able to continue all bowel treatments and medications while pregnant. But I had a thought that kept creeping in, a worry that I may be unwell with bowel issues at the end of my pregnancy. I so badly wanted to be well enough to mind my baby once they arrived. I’m a self employed visual artist, I work mainly on commissions or bursaries. I had finished up a year long project where I was awarded the New Work Award with Arts and Disability Ireland, and I had also just graduated from my Masters course. I decided to stop working in February, my baby was due in May. The plan was to rest as much as possible, to make sure I would be fit for the baby’s arrival! I had sinus issues while pregnant and had to take antibiotics. I had a lot of joint pain as well, this is something I get anyway – I attend the rheumatology department in Beaumont. Noel, my fiancé, got tested around 5 years previous to see if he was a carrier of the CF gene and he isn’t. So we knew the baby wouldn’t have CF, but they may be a carrier of the CF gene. www.cfireland.ie 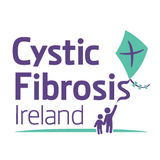 The Winter 2019 edition of Spectrum includes a feature on fertility, pregnancy and parenthood with contributions from several members of the...

The Winter 2019 edition of Spectrum includes a feature on fertility, pregnancy and parenthood with contributions from several members of the...