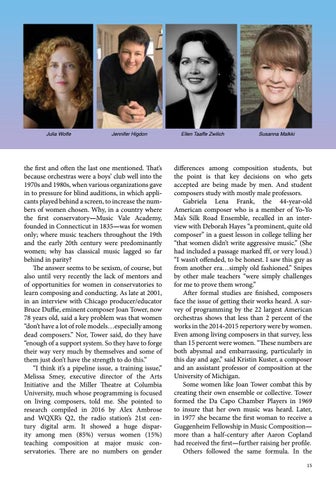 the first and often the last one mentioned. That’s because orchestras were a boys’ club well into the 1970s and 1980s, when various organizations gave in to pressure for blind auditions, in which applicants played behind a screen, to increase the numbers of women chosen. Why, in a country where the first conservatory—Music Vale Academy, founded in Connecticut in 1835—was for women only; where music teachers throughout the 19th and the early 20th century were predominantly women; why has classical music lagged so far behind in parity? The answer seems to be sexism, of course, but also until very recently the lack of mentors and of opportunities for women in conservatories to learn composing and conducting. As late at 2001, in an interview with Chicago producer/educator Bruce Duffie, eminent composer Joan Tower, now 78 years old, said a key problem was that women “don’t have a lot of role models…especially among dead composers.” Nor, Tower said, do they have “enough of a support system. So they have to forge their way very much by themselves and some of them just don’t have the strength to do this.” “I think it’s a pipeline issue, a training issue,” Melissa Smey, executive director of the Arts Initiative and the Miller Theatre at Columbia University, much whose programming is focused on living composers, told me. She pointed to research compiled in 2016 by Alex Ambrose and WQXR’s Q2, the radio station’s 21st century digital arm. It showed a huge disparity among men (85%) versus women (15%) teaching composition at major music conservatories. There are no numbers on gender

differences among composition students, but the point is that key decisions on who gets accepted are being made by men. And student composers study with mostly male professors. Gabriela Lena Frank, the 44-year-old American composer who is a member of Yo-Yo Ma’s Silk Road Ensemble, recalled in an interview with Deborah Hayes “a prominent, quite old composer” in a guest lesson in college telling her “that women didn’t write aggressive music.” (She had included a passage marked fff, or very loud.) “I wasn’t offended, to be honest. I saw this guy as from another era…simply old fashioned.” Snipes by other male teachers “were simply challenges for me to prove them wrong.” After formal studies are finished, composers face the issue of getting their works heard. A survey of programming by the 22 largest American orchestras shows that less than 2 percent of the works in the 2014-2015 repertory were by women. Even among living composers in that survey, less than 15 percent were women. “These numbers are both abysmal and embarrassing, particularly in this day and age,” said Kristin Kuster, a composer and an assistant professor of composition at the University of Michigan. Some women like Joan Tower combat this by creating their own ensemble or collective. Tower formed the Da Capo Chamber Players in 1969 to insure that her own music was heard. Later, in 1977 she became the first woman to receive a Guggenheim Fellowship in Music Composition— more than a half-century after Aaron Copland had received the first—further raising her profile. Others followed the same formula. In the 15