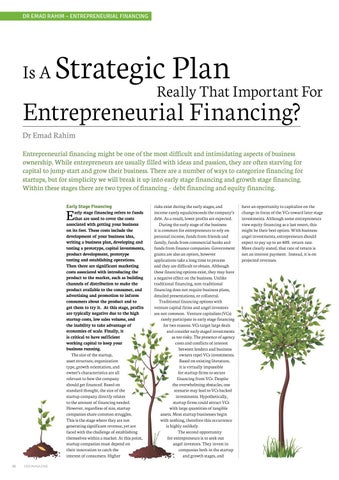 Really That Important For

Entrepreneurial financing might be one of the most difficult and intimidating aspects of business ownership. While entrepreneurs are usually filled with ideas and passion, they are often starving for capital to jump-start and grow their business. There are a number of ways to categorize financing for startups, but for simplicity we will break it up into early stage financing and growth stage financing. Within these stages there are two types of financing – debt financing and equity financing. Early Stage Financing arly stage financing refers to funds that are used to cover the costs associated with getting your business on its feet. These costs include the development of your business idea, writing a business plan, developing and testing a prototype, capital investments, product development, prototype testing and establishing operations. Then there are significant marketing costs associated with introducing the product to the market, such as building channels of distribution to make the product available to the consumer, and advertising and promotion to inform consumers about the product and to get them to try it. At this stage, profits are typically negative due to the high startup costs, low sales volume, and the inability to take advantage of economies of scale. Finally, it is critical to have sufficient working capital to keep your business running. The size of the startup, asset structure, organization type, growth orientation, and owner’s characteristics are all relevant to how the company should get financed. Based on standard thought, the size of the startup company directly relates to the amount of financing needed. However, regardless of size, startup companies share common struggles. This is the stage where they are not generating significant revenue, yet are faced with the challenge of establishing themselves within a market. At this point, startup companies must depend on their innovation to catch the interest of consumers. Higher

risks exist during the early stages, and income rarely equals/exceeds the company’s debt. As a result, lower profits are expected. During the early stage of the business it is common for entrepreneurs to rely on personal income, funds from friends and family, funds from commercial banks and funds from finance companies. Government grants are also an option, however applications take a long time to process and they are difficult to obtain. Although these financing options exist, they may have a negative effect on the business. Unlike traditional financing, non-traditional financing does not require business plans, detailed presentations, or collateral. Traditional financing options with venture capital firms and angel investors are not common. Venture capitalists (VCs) rarely participate in early stage financing for two reasons. VCs target large deals and consider early staged investments as too risky. The presence of agency costs and conflicts of interest between lenders and business owners repel VCs investments. Based on existing literature, it is virtually impossible for startup firms to secure financing from VCs. Despite the overwhelming obstacles, one scenario may lead to VCs backed investments. Hypothetically, startup firms could attract VCs with large quantities of tangible assets. Most startup businesses begin with nothing, therefore this occurrence is highly unlikely. The second opportunity for entrepreneurs is to seek out angel investors. They invest in companies both in the startup and growth stages, and

have an opportunity to capitalize on the change in focus of the VCs toward later stage investments. Although some entrepreneurs view equity financing as a last resort, this might be their best option. With business angel investments, entrepreneurs should expect to pay up to an 80% return rate. More clearly stated, that rate of return is not an interest payment. Instead, it is on projected revenues. 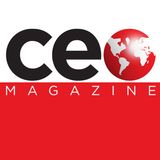 The definitive guide to MBAs

The definitive guide to MBAs