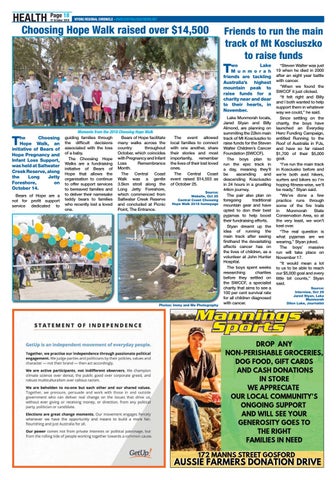 wo Lake M u n m o r a h friends are tackling Australia’s highest mountain peak to raise funds for a charity near and dear to their hearts, in November.

he Choosing Hope Walk, an initiative of Bears of Hope Pregnancy and Infant Loss Support, was held at Saltwater Creek Reserve, along the Long Jetty Foreshore, on October 14.

Moments from the 2018 Choosing Hope Walk guiding families through Bears of Hope facilitate the difficult decisions many walks across the associated with the loss country throughout of a baby. October, which coincides The Choosing Hope with Pregnancy and Infant Remembrance Walks are a fundraising Loss initiative of Bears of Month. Hope that allows the The Central Coast organisation to continue Walk was a gentle to offer support services 3.5km stroll along the to bereaved families and Long Jetty Foreshore, to deliver their namesake which commenced from teddy bears to families Saltwater Creek Reserve who recently lost a loved and concluded at Picnic one. Point, The Entrance.

The event allowed local families to connect with one another, share their stories and most importantly, remember the lives of their lost loved ones. The Central Coast event raised $14,553 as of October 25. Source: Website, Oct 25 Central Coast Choosing Hope Walk 2018 homepage

Photos: Immy and Me Photography

Lake Munmorah locals, Jared Styan and Billy Almond, are planning on summiting the 22km main track of Mt Kosciuszko to raise funds for the Steven Walter Children’s Cancer Foundation (SWCCF). The boys plan to run the epic track in a day, meaning they’ll be ascending and descending Kosciuszko in 24 hours in a gruelling 44km journey. The pair also plan on foregoing traditional mountain gear and have opted to don their best pyjamas to help boost their fundraising efforts. Styan dreamt up the idea of running the main track after seeing firsthand the devastating effects cancer has on the lives of children, as a volunteer at John Hunter Hospital. The boys spent weeks researching charities before they settled on the SWCCF, a specialist charity that aims to see a 100 per cent survival rate for all children diagnosed with cancer.

“Steven Walter was just 19 when he died in 2000 after an eight year battle with cancer. “When we found the SWCCF it just clicked. “It felt right and Billy and I both wanted to help support them in whatever way we could,” he said. Since settling on the charity, the boys have launched an Everyday Hero Funding Campaign, entitled Running to the Roof of Australia in PJs, and have so far raised $1,700 of their $5,000 goal. “I’ve run the main track in Kosciusko before and we’re both avid hikers, surfers and bikers so I’m hoping fitness-wise, we’ll be ready,” Styan said. “We’ve done a few practice runs through some of the fire trails in Munmorah State Conservation Area, so at the very least, we won’t keel over. “The real question is what pyjamas are we wearing,” Styan joked. The boys’ massive run will take place on November 17. “It would mean a lot to us to be able to reach our $5,000 goal and every little bit counts,” Styan said. Source: Interview, Oct 29 Jared Styan, Lake Munmorah Dilon Luke, Journalist 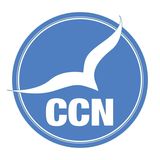