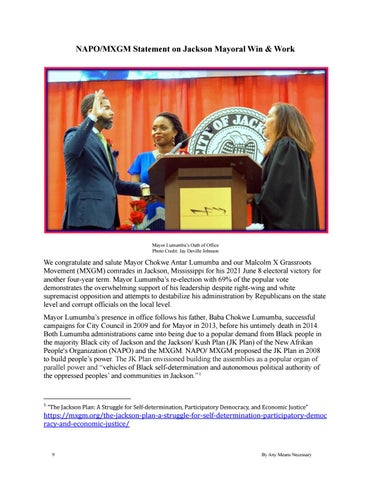 We congratulate and salute Mayor Chokwe Antar Lumumba and our Malcolm X Grassroots Movement (MXGM) comrades in Jackson, Mississippi for his 2021 June 8 electoral victory for another four-year term. Mayor Lumumba’s re-election with 69% of the popular vote demonstrates the overwhelming support of his leadership despite right-wing and white supremacist opposition and attempts to destabilize his administration by Republicans on the state level and corrupt officials on the local level. Mayor Lumumba’s presence in office follows his father, Baba Chokwe Lumumba, successful campaigns for City Council in 2009 and for Mayor in 2013, before his untimely death in 2014. Both Lumumba administrations came into being due to a popular demand from Black people in the majority Black city of Jackson and the Jackson/ Kush Plan (JK Plan) of the New Afrikan People&#39;s Organization (NAPO) and the MXGM. NAPO/ MXGM proposed the JK Plan in 2008 to build people’s power. The JK Plan envisioned building the assemblies as a popular organ of parallel power and “vehicles of Black self-determination and autonomous political authority of the oppressed peoples’ and communities in Jackson.” 1

“The Jackson Plan: A Struggle for Self-determination, Participatory Democracy, and Economic Justice”