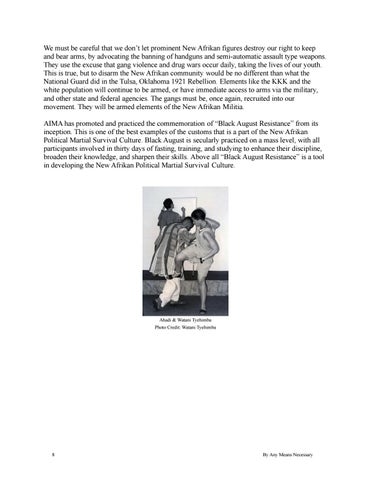 We must be careful that we don’t let prominent New Afrikan figures destroy our right to keep and bear arms, by advocating the banning of handguns and semi-automatic assault type weapons. They use the excuse that gang violence and drug wars occur daily, taking the lives of our youth. This is true, but to disarm the New Afrikan community would be no different than what the National Guard did in the Tulsa, Oklahoma 1921 Rebellion. Elements like the KKK and the white population will continue to be armed, or have immediate access to arms via the military, and other state and federal agencies. The gangs must be, once again, recruited into our movement. They will be armed elements of the New Afrikan Militia. AIMA has promoted and practiced the commemoration of “Black August Resistance” from its inception. This is one of the best examples of the customs that is a part of the New Afrikan Political Martial Survival Culture. Black August is secularly practiced on a mass level, with all participants involved in thirty days of fasting, training, and studying to enhance their discipline, broaden their knowledge, and sharpen their skills. Above all “Black August Resistance” is a tool in developing the New Afrikan Political Martial Survival Culture.