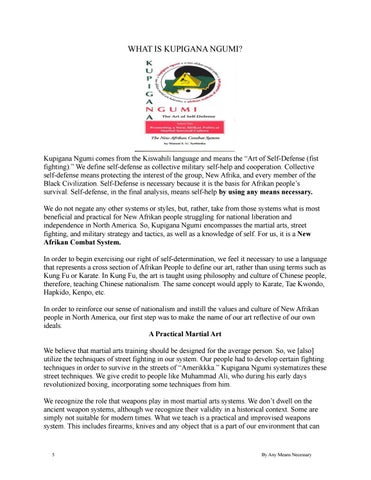 Kupigana Ngumi comes from the Kiswahili language and means the “Art of Self-Defense (fist fighting).” We define self-defense as collective military self-help and cooperation. Collective self-defense means protecting the interest of the group, New Afrika, and every member of the Black Civilization. Self-Defense is necessary because it is the basis for Afrikan people’s survival. Self-defense, in the final analysis, means self-help by using any means necessary. We do not negate any other systems or styles, but, rather, take from those systems what is most beneficial and practical for New Afrikan people struggling for national liberation and independence in North America. So, Kupigana Ngumi encompasses the martial arts, street fighting, and military strategy and tactics, as well as a knowledge of self. For us, it is a New Afrikan Combat System. In order to begin exercising our right of self-determination, we feel it necessary to use a language that represents a cross section of Afrikan People to define our art, rather than using terms such as Kung Fu or Karate. In Kung Fu, the art is taught using philosophy and culture of Chinese people, therefore, teaching Chinese nationalism. The same concept would apply to Karate, Tae Kwondo, Hapkido, Kenpo, etc. In order to reinforce our sense of nationalism and instill the values and culture of New Afrikan people in North America, our first step was to make the name of our art reflective of our own ideals. A Practical Martial Art We believe that martial arts training should be designed for the average person. So, we [also] utilize the techniques of street fighting in our system. Our people had to develop certain fighting techniques in order to survive in the streets of “Amerikkka.” Kupigana Ngumi systematizes these street techniques. We give credit to people like Muhammad Ali, who during his early days revolutionized boxing, incorporating some techniques from him. We recognize the role that weapons play in most martial arts systems. We don’t dwell on the ancient weapon systems, although we recognize their validity in a historical context. Some are simply not suitable for modern times. What we teach is a practical and improvised weapons system. This includes firearms, knives and any object that is a part of our environment that can