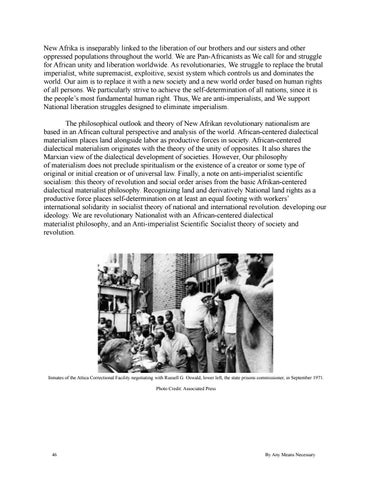 New Afrika is inseparably linked to the liberation of our brothers and our sisters and other oppressed populations throughout the world. We are Pan-Africanists as We call for and struggle for African unity and liberation worldwide. As revolutionaries, We struggle to replace the brutal imperialist, white supremacist, exploitive, sexist system which controls us and dominates the world. Our aim is to replace it with a new society and a new world order based on human rights of all persons. We particularly strive to achieve the self-determination of all nations, since it is the people’s most fundamental human right. Thus, We are anti-imperialists, and We support National liberation struggles designed to eliminate imperialism. The philosophical outlook and theory of New Afrikan revolutionary nationalism are based in an African cultural perspective and analysis of the world. African-centered dialectical materialism places land alongside labor as productive forces in society. African-centered dialectical materialism originates with the theory of the unity of opposites. It also shares the Marxian view of the dialectical development of societies. However, Our philosophy of materialism does not preclude spiritualism or the existence of a creator or some type of original or initial creation or of universal law. Finally, a note on anti-imperialist scientific socialism: this theory of revolution and social order arises from the basic Afrikan-centered dialectical materialist philosophy. Recognizing land and derivatively National land rights as a productive force places self-determination on at least an equal footing with workers’ international solidarity in socialist theory of national and international revolution. developing our ideology. We are revolutionary Nationalist with an African-centered dialectical materialist philosophy, and an Anti-imperialist Scientific Socialist theory of society and revolution.