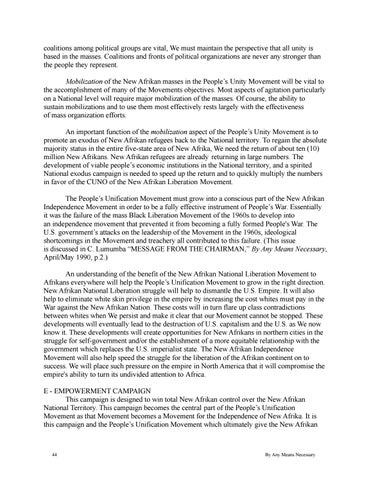 coalitions among political groups are vital, We must maintain the perspective that all unity is based in the masses. Coalitions and fronts of political organizations are never any stronger than the people they represent. Mobilization of the New Afrikan masses in the People’s Unity Movement will be vital to the accomplishment of many of the Movements objectives. Most aspects of agitation particularly on a National level will require major mobilization of the masses. Of course, the ability to sustain mobilizations and to use them most effectively rests largely with the effectiveness of mass organization efforts. An important function of the mobilization aspect of the People’s Unity Movement is to promote an exodus of New Afrikan refugees back to the National territory. To regain the absolute majority status in the entire five-state area of New Afrika, We need the return of about ten (10) million New Afrikans. New Afrikan refugees are already returning in large numbers. The development of viable people’s economic institutions in the National territory, and a spirited National exodus campaign is needed to speed up the return and to quickly multiply the numbers in favor of the CUNO of the New Afrikan Liberation Movement. The People’s Unification Movement must grow into a conscious part of the New Afrikan Independence Movement in order to be a fully effective instrument of People’s War. Essentially it was the failure of the mass Black Liberation Movement of the 1960s to develop into an independence movement that prevented it from becoming a fully formed People&#39;s War. The U.S. government’s attacks on the leadership of the Movement in the 1960s, ideological shortcomings in the Movement and treachery all contributed to this failure. (This issue is discussed in C. Lumumba “MESSAGE FROM THE CHAIRMAN,” By Any Means Necessary, April/May 1990, p.2.) An understanding of the benefit of the New Afrikan National Liberation Movement to Afrikans everywhere will help the People’s Unification Movement to grow in the right direction. New Afrikan National Liberation struggle will help to dismantle the U.S. Empire. It will also help to eliminate white skin privilege in the empire by increasing the cost whites must pay in the War against the New Afrikan Nation. These costs will in turn flare up class contradictions between whites when We persist and make it clear that our Movement cannot be stopped. These developments will eventually lead to the destruction of U.S. capitalism and the U.S. as We now know it. These developments will create opportunities for New Afrikans in northern cities in the struggle for self-government and/or the establishment of a more equitable relationship with the government which replaces the U.S. imperialist state. The New Afrikan Independence Movement will also help speed the struggle for the liberation of the Afrikan continent on to success. We will place such pressure on the empire in North America that it will compromise the empire&#39;s ability to turn its undivided attention to Africa. E - EMPOWERMENT CAMPAIGN This campaign is designed to win total New Afrikan control over the New Afrikan National Territory. This campaign becomes the central part of the People’s Unification Movement as that Movement becomes a Movement for the Independence of New Afrika. It is this campaign and the People’s Unification Movement which ultimately give the New Afrikan