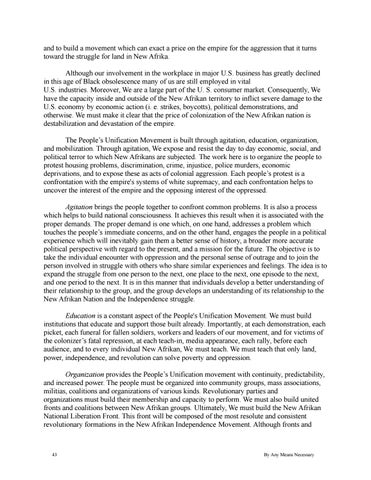 and to build a movement which can exact a price on the empire for the aggression that it turns toward the struggle for land in New Afrika. Although our involvement in the workplace in major U.S. business has greatly declined in this age of Black obsolescence many of us are still employed in vital U.S. industries. Moreover, We are a large part of the U. S. consumer market. Consequently, We have the capacity inside and outside of the New Afrikan territory to inflict severe damage to the U.S. economy by economic action (i. e. strikes, boycotts), political demonstrations, and otherwise. We must make it clear that the price of colonization of the New Afrikan nation is destabilization and devastation of the empire. The People’s Unification Movement is built through agitation, education, organization, and mobilization. Through agitation, We expose and resist the day to day economic, social, and political terror to which New Afrikans are subjected. The work here is to organize the people to protest housing problems, discrimination, crime, injustice, police murders, economic deprivations, and to expose these as acts of colonial aggression. Each people’s protest is a confrontation with the empire&#39;s systems of white supremacy, and each confrontation helps to uncover the interest of the empire and the opposing interest of the oppressed. Agitation brings the people together to confront common problems. It is also a process which helps to build national consciousness. It achieves this result when it is associated with the proper demands. The proper demand is one which, on one hand, addresses a problem which touches the people’s immediate concerns, and on the other hand, engages the people in a political experience which will inevitably gain them a better sense of history, a broader more accurate political perspective with regard to the present, and a mission for the future. The objective is to take the individual encounter with oppression and the personal sense of outrage and to join the person involved in struggle with others who share similar experiences and feelings. The idea is to expand the struggle from one person to the next, one place to the next, one episode to the next, and one period to the next. It is in this manner that individuals develop a better understanding of their relationship to the group, and the group develops an understanding of its relationship to the New Afrikan Nation and the Independence struggle. Education is a constant aspect of the People&#39;s Unification Movement. We must build institutions that educate and support those built already. Importantly, at each demonstration, each picket, each funeral for fallen soldiers, workers and leaders of our movement, and for victims of the colonizer’s fatal repression, at each teach-in, media appearance, each rally, before each audience, and to every individual New Afrikan, We must teach. We must teach that only land, power, independence, and revolution can solve poverty and oppression. Organization provides the People’s Unification movement with continuity, predictability, and increased power. The people must be organized into community groups, mass associations, militias, coalitions and organizations of various kinds. Revolutionary parties and organizations must build their membership and capacity to perform. We must also build united fronts and coalitions between New Afrikan groups. Ultimately, We must build the New Afrikan National Liberation Front. This front will be composed of the most resolute and consistent revolutionary formations in the New Afrikan Independence Movement. Although fronts and