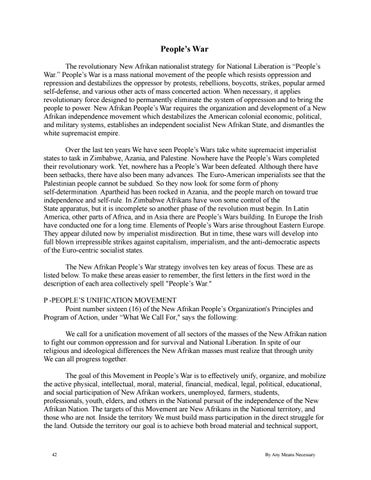 People’s War The revolutionary New Afrikan nationalist strategy for National Liberation is “People’s War.” People’s War is a mass national movement of the people which resists oppression and repression and destabilizes the oppressor by protests, rebellions, boycotts, strikes, popular armed self-defense, and various other acts of mass concerted action. When necessary, it applies revolutionary force designed to permanently eliminate the system of oppression and to bring the people to power. New Afrikan People’s War requires the organization and development of a New Afrikan independence movement which destabilizes the American colonial economic, political, and military systems, establishes an independent socialist New Afrikan State, and dismantles the white supremacist empire. Over the last ten years We have seen People’s Wars take white supremacist imperialist states to task in Zimbabwe, Azania, and Palestine. Nowhere have the People’s Wars completed their revolutionary work. Yet, nowhere has a People’s War been defeated. Although there have been setbacks, there have also been many advances. The Euro-American imperialists see that the Palestinian people cannot be subdued. So they now look for some form of phony self-determination. Apartheid has been rocked in Azania, and the people march on toward true independence and self-rule. In Zimbabwe Afrikans have won some control of the State apparatus, but it is incomplete so another phase of the revolution must begin. In Latin America, other parts of Africa, and in Asia there are People’s Wars building. In Europe the Irish have conducted one for a long time. Elements of People’s Wars arise throughout Eastern Europe. They appear diluted now by imperialist misdirection. But in time, these wars will develop into full blown irrepressible strikes against capitalism, imperialism, and the anti-democratic aspects of the Euro-centric socialist states. The New Afrikan People’s War strategy involves ten key areas of focus. These are as listed below. To make these areas easier to remember, the first letters in the first word in the description of each area collectively spell &quot;People’s War.&quot; P -PEOPLE’S UNIFICATION MOVEMENT Point number sixteen (16) of the New Afrikan People’s Organization&#39;s Principles and Program of Action, under “What We Call For,&quot; says the following: We call for a unification movement of all sectors of the masses of the New Afrikan nation to fight our common oppression and for survival and National Liberation. In spite of our religious and ideological differences the New Afrikan masses must realize that through unity We can all progress together. The goal of this Movement in People’s War is to effectively unify, organize, and mobilize the active physical, intellectual, moral, material, financial, medical, legal, political, educational, and social participation of New Afrikan workers, unemployed, farmers, students, professionals, youth, elders, and others in the National pursuit of the independence of the New Afrikan Nation. The targets of this Movement are New Afrikans in the National territory, and those who are not. Inside the territory We must build mass participation in the direct struggle for the land. Outside the territory our goal is to achieve both broad material and technical support,