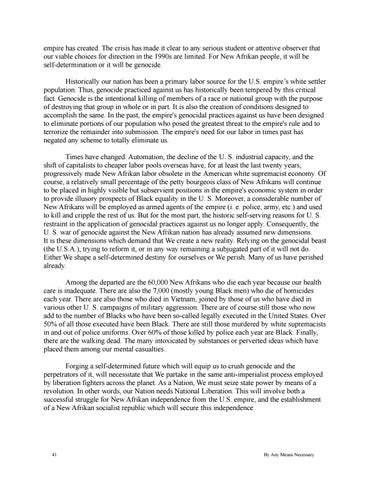 empire has created. The crisis has made it clear to any serious student or attentive observer that our viable choices for direction in the 1990s are limited. For New Afrikan people, it will be self-determination or it will be genocide. Historically our nation has been a primary labor source for the U.S. empire’s white settler population. Thus, genocide practiced against us has historically been tempered by this critical fact. Genocide is the intentional killing of members of a race or national group with the purpose of destroying that group in whole or in part. It is also the creation of conditions designed to accomplish the same. In the past, the empire&#39;s genocidal practices against us have been designed to eliminate portions of our population who posed the greatest threat to the empire&#39;s rule and to terrorize the remainder into submission. The empire&#39;s need for our labor in times past has negated any scheme to totally eliminate us. Times have changed. Automation, the decline of the U. S. industrial capacity, and the shift of capitalists to cheaper labor pools overseas have, for at least the last twenty years, progressively made New Afrikan labor obsolete in the American white supremacist economy. Of course, a relatively small percentage of the petty bourgeois class of New Afrikans will continue to be placed in highly visible but subservient positions in the empire&#39;s economic system in order to provide illusory prospects of Black equality in the U. S. Moreover, a considerable number of New Afrikans will be employed as armed agents of the empire (i. e. police, army, etc.) and used to kill and cripple the rest of us. But for the most part, the historic self-serving reasons for U. S. restraint in the application of genocidal practices against us no longer apply. Consequently, the U. S. war of genocide against the New Afrikan nation has already assumed new dimensions. It is these dimensions which demand that We create a new reality. Relying on the genocidal beast (the U.S.A.), trying to reform it, or in any way remaining a subjugated part of it will not do. Either We shape a self-determined destiny for ourselves or We perish. Many of us have perished already. Among the departed are the 60,000 New Afrikans who die each year because our health care is inadequate. There are also the 7,000 (mostly young Black men) who die of homicides each year. There are also those who died in Vietnam, joined by those of us who have died in various other U. S. campaigns of military aggression. There are of course still those who now add to the number of Blacks who have been so-called legally executed in the United States. Over 50% of all those executed have been Black. There are still those murdered by white supremacists in and out of police uniforms. Over 60% of those killed by police each year are Black. Finally, there are the walking dead. The many intoxicated by substances or perverted ideas which have placed them among our mental casualties. Forging a self-determined future which will equip us to crush genocide and the perpetrators of it, will necessitate that We partake in the same anti-imperialist process employed by liberation fighters across the planet. As a Nation, We must seize state power by means of a revolution. In other words, our Nation needs National Liberation. This will involve both a successful struggle for New Afrikan independence from the U.S. empire, and the establishment of a New Afrikan socialist republic which will secure this independence.