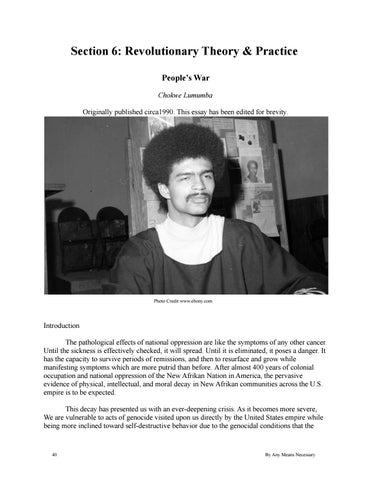 Introduction The pathological effects of national oppression are like the symptoms of any other cancer. Until the sickness is effectively checked, it will spread. Until it is eliminated, it poses a danger. It has the capacity to survive periods of remissions, and then to resurface and grow while manifesting symptoms which are more putrid than before. After almost 400 years of colonial occupation and national oppression of the New Afrikan Nation in America, the pervasive evidence of physical, intellectual, and moral decay in New Afrikan communities across the U.S. empire is to be expected. This decay has presented us with an ever-deepening crisis. As it becomes more severe, We are vulnerable to acts of genocide visited upon us directly by the United States empire while being more inclined toward self-destructive behavior due to the genocidal conditions that the