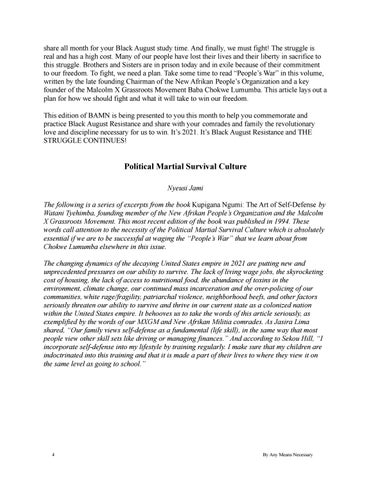 share all month for your Black August study time. And finally, we must fight! The struggle is real and has a high cost. Many of our people have lost their lives and their liberty in sacrifice to this struggle. Brothers and Sisters are in prison today and in exile because of their commitment to our freedom. To fight, we need a plan. Take some time to read “People’s War” in this volume, written by the late founding Chairman of the New Afrikan People’s Organization and a key founder of the Malcolm X Grassroots Movement Baba Chokwe Lumumba. This article lays out a plan for how we should fight and what it will take to win our freedom. This edition of BAMN is being presented to you this month to help you commemorate and practice Black August Resistance and share with your comrades and family the revolutionary love and discipline necessary for us to win. It’s 2021. It’s Black August Resistance and THE STRUGGLE CONTINUES!

Political Martial Survival Culture Nyeusi Jami The following is a series of excerpts from the book Kupigana Ngumi: The Art of Self-Defense by Watani Tyehimba, founding member of the New Afrikan People’s Organization and the Malcolm X Grassroots Movement. This most recent edition of the book was published in 1994. These words call attention to the necessity of the Political Martial Survival Culture which is absolutely essential if we are to be successful at waging the “People’s War” that we learn about from Chokwe Lumumba elsewhere in this issue. The changing dynamics of the decaying United States empire in 2021 are putting new and unprecedented pressures on our ability to survive. The lack of living wage jobs, the skyrocketing cost of housing, the lack of access to nutritional food, the abundance of toxins in the environment, climate change, our continued mass incarceration and the over-policing of our communities, white rage/fragility, patriarchal violence, neighborhood beefs, and other factors seriously threaten our ability to survive and thrive in our current state as a colonized nation within the United States empire. It behooves us to take the words of this article seriously, as exemplified by the words of our MXGM and New Afrikan Militia comrades. As Jasira Lima shared, “Our family views self-defense as a fundamental (life skill), in the same way that most people view other skill sets like driving or managing finances.” And according to Sekou Hill, “I incorporate self-defense into my lifestyle by training regularly. I make sure that my children are indoctrinated into this training and that it is made a part of their lives to where they view it on the same level as going to school.”