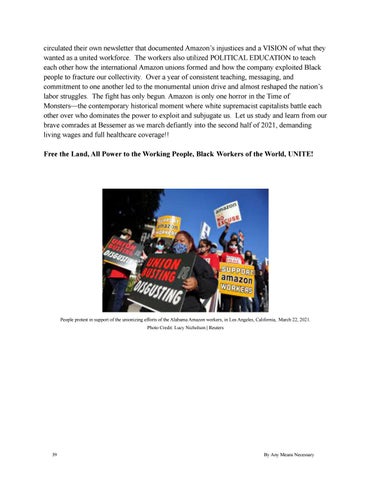 circulated their own newsletter that documented Amazon’s injustices and a VISION of what they wanted as a united workforce. The workers also utilized POLITICAL EDUCATION to teach each other how the international Amazon unions formed and how the company exploited Black people to fracture our collectivity. Over a year of consistent teaching, messaging, and commitment to one another led to the monumental union drive and almost reshaped the nation’s labor struggles. The fight has only begun. Amazon is only one horror in the Time of Monsters—the contemporary historical moment where white supremacist capitalists battle each other over who dominates the power to exploit and subjugate us. Let us study and learn from our brave comrades at Bessemer as we march defiantly into the second half of 2021, demanding living wages and full healthcare coverage!! Free the Land, All Power to the Working People, Black Workers of the World, UNITE!