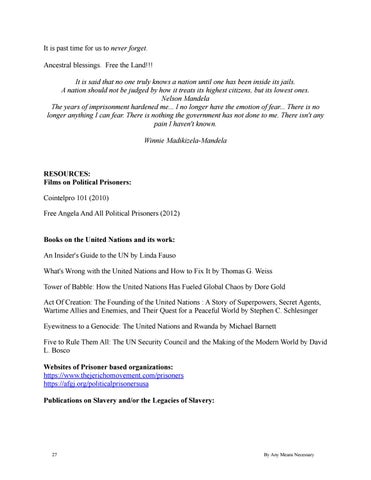 It is past time for us to never forget. Ancestral blessings. Free the Land!!! It is said that no one truly knows a nation until one has been inside its jails. A nation should not be judged by how it treats its highest citizens, but its lowest ones. Nelson Mandela The years of imprisonment hardened me... I no longer have the emotion of fear... There is no longer anything I can fear. There is nothing the government has not done to me. There isn&#39;t any pain I haven&#39;t known. Winnie Madikizela-Mandela

Books on the United Nations and its work: An Insider&#39;s Guide to the UN by Linda Fauso What&#39;s Wrong with the United Nations and How to Fix It by Thomas G. Weiss Tower of Babble: How the United Nations Has Fueled Global Chaos by Dore Gold Act Of Creation: The Founding of the United Nations : A Story of Superpowers, Secret Agents, Wartime Allies and Enemies, and Their Quest for a Peaceful World by Stephen C. Schlesinger Eyewitness to a Genocide: The United Nations and Rwanda by Michael Barnett Five to Rule Them All: The UN Security Council and the Making of the Modern World by David L. Bosco Websites of Prisoner based organizations: https://www.thejerichomovement.com/prisoners https://afgj.org/politicalprisonersusa Publications on Slavery and/or the Legacies of Slavery: