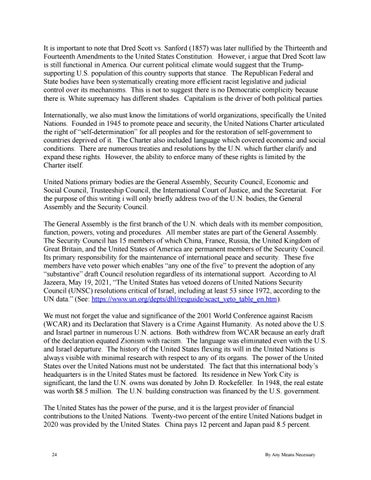 It is important to note that Dred Scott vs. Sanford (1857) was later nullified by the Thirteenth and Fourteenth Amendments to the United States Constitution. However, i argue that Dred Scott law is still functional in America. Our current political climate would suggest that the Trumpsupporting U.S. population of this country supports that stance. The Republican Federal and State bodies have been systematically creating more efficient racist legislative and judicial control over its mechanisms. This is not to suggest there is no Democratic complicity because there is. White supremacy has different shades. Capitalism is the driver of both political parties. Internationally, we also must know the limitations of world organizations, specifically the United Nations. Founded in 1945 to promote peace and security, the United Nations Charter articulated the right of “self-determination” for all peoples and for the restoration of self-government to countries deprived of it. The Charter also included language which covered economic and social conditions. There are numerous treaties and resolutions by the U.N. which further clarify and expand these rights. However, the ability to enforce many of these rights is limited by the Charter itself. United Nations primary bodies are the General Assembly, Security Council, Economic and Social Council, Trusteeship Council, the International Court of Justice, and the Secretariat. For the purpose of this writing i will only briefly address two of the U.N. bodies, the General Assembly and the Security Council. The General Assembly is the first branch of the U.N. which deals with its member composition, function, powers, voting and procedures. All member states are part of the General Assembly. The Security Council has 15 members of which China, France, Russia, the United Kingdom of Great Britain, and the United States of America are permanent members of the Security Council. Its primary responsibility for the maintenance of international peace and security. These five members have veto power which enables “any one of the five” to prevent the adoption of any “substantive” draft Council resolution regardless of its international support. According to Al Jazeera, May 19, 2021, “The United States has vetoed dozens of United Nations Security Council (UNSC) resolutions critical of Israel, including at least 53 since 1972, according to the UN data.” (See: https://www.un.org/depts/dhl/resguide/scact_veto_table_en.htm). We must not forget the value and significance of the 2001 World Conference against Racism (WCAR) and its Declaration that Slavery is a Crime Against Humanity. As noted above the U.S. and Israel partner in numerous U.N. actions. Both withdrew from WCAR because an early draft of the declaration equated Zionism with racism. The language was eliminated even with the U.S. and Israel departure. The history of the United States flexing its will in the United Nations is always visible with minimal research with respect to any of its organs. The power of the United States over the United Nations must not be understated. The fact that this international body’s headquarters is in the United States must be factored. Its residence in New York City is significant, the land the U.N. owns was donated by John D. Rockefeller. In 1948, the real estate was worth $8.5 million. The U.N. building construction was financed by the U.S. government. The United States has the power of the purse, and it is the largest provider of financial contributions to the United Nations. Twenty-two percent of the entire United Nations budget in 2020 was provided by the United States. China pays 12 percent and Japan paid 8.5 percent.