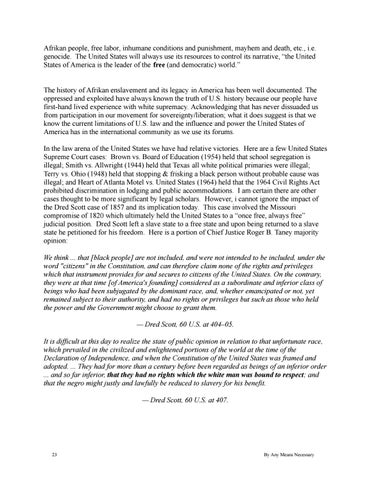 Afrikan people, free labor, inhumane conditions and punishment, mayhem and death, etc., i.e. genocide. The United States will always use its resources to control its narrative, “the United States of America is the leader of the free (and democratic) world.” The history of Afrikan enslavement and its legacy in America has been well documented. The oppressed and exploited have always known the truth of U.S. history because our people have first-hand lived experience with white supremacy. Acknowledging that has never dissuaded us from participation in our movement for sovereignty/liberation; what it does suggest is that we know the current limitations of U.S. law and the influence and power the United States of America has in the international community as we use its forums. In the law arena of the United States we have had relative victories. Here are a few United States Supreme Court cases: Brown vs. Board of Education (1954) held that school segregation is illegal; Smith vs. Allwright (1944) held that Texas all white political primaries were illegal; Terry vs. Ohio (1948) held that stopping &amp; frisking a black person without probable cause was illegal; and Heart of Atlanta Motel vs. United States (1964) held that the 1964 Civil Rights Act prohibited discrimination in lodging and public accommodations. I am certain there are other cases thought to be more significant by legal scholars. However, i cannot ignore the impact of the Dred Scott case of 1857 and its implication today. This case involved the Missouri compromise of 1820 which ultimately held the United States to a “once free, always free” judicial position. Dred Scott left a slave state to a free state and upon being returned to a slave state he petitioned for his freedom. Here is a portion of Chief Justice Roger B. Taney majority opinion: We think ... that [black people] are not included, and were not intended to be included, under the word &quot;citizens&quot; in the Constitution, and can therefore claim none of the rights and privileges which that instrument provides for and secures to citizens of the United States. On the contrary, they were at that time [of America&#39;s founding] considered as a subordinate and inferior class of beings who had been subjugated by the dominant race, and, whether emancipated or not, yet remained subject to their authority, and had no rights or privileges but such as those who held the power and the Government might choose to grant them. — Dred Scott, 60 U.S. at 404–05. It is difficult at this day to realize the state of public opinion in relation to that unfortunate race, which prevailed in the civilized and enlightened portions of the world at the time of the Declaration of Independence, and when the Constitution of the United States was framed and adopted. ... They had for more than a century before been regarded as beings of an inferior order ... and so far inferior, that they had no rights which the white man was bound to respect; and that the negro might justly and lawfully be reduced to slavery for his benefit. — Dred Scott, 60 U.S. at 407.