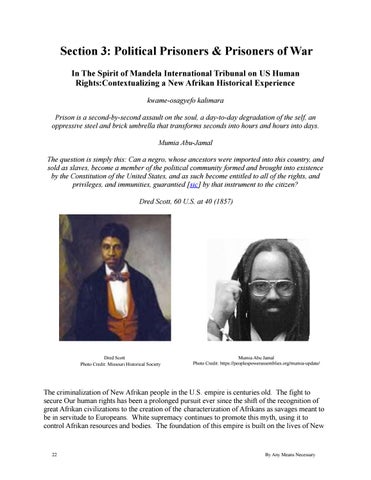 Section 3: Political Prisoners &amp; Prisoners of War In The Spirit of Mandela International Tribunal on US Human Rights:Contextualizing a New Afrikan Historical Experience kwame-osagyefo kalimara Prison is a second-by-second assault on the soul, a day-to-day degradation of the self, an oppressive steel and brick umbrella that transforms seconds into hours and hours into days. Mumia Abu-Jamal The question is simply this: Can a negro, whose ancestors were imported into this country, and sold as slaves, become a member of the political community formed and brought into existence by the Constitution of the United States, and as such become entitled to all of the rights, and privileges, and immunities, guarantied [sic] by that instrument to the citizen?  Dred Scott, 60 U.S. at 40 (1857)

The criminalization of New Afrikan people in the U.S. empire is centuries old. The fight to secure Our human rights has been a prolonged pursuit ever since the shift of the recognition of great Afrikan civilizations to the creation of the characterization of Afrikans as savages meant to be in servitude to Europeans. White supremacy continues to promote this myth, using it to control Afrikan resources and bodies. The foundation of this empire is built on the lives of New