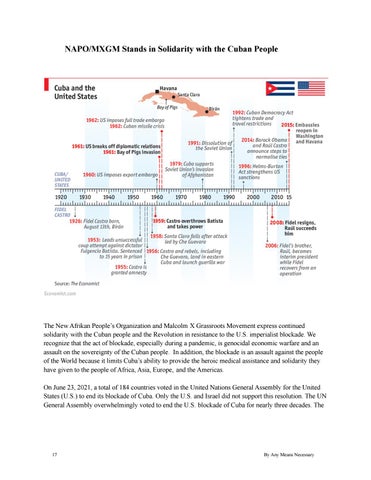 NAPO/MXGM Stands in Solidarity with the Cuban People

The New Afrikan People’s Organization and Malcolm X Grassroots Movement express continued solidarity with the Cuban people and the Revolution in resistance to the U.S. imperialist blockade. We recognize that the act of blockade, especially during a pandemic, is genocidal economic warfare and an assault on the sovereignty of the Cuban people. In addition, the blockade is an assault against the people of the World because it limits Cuba’s ability to provide the heroic medical assistance and solidarity they have given to the people of Africa, Asia, Europe, and the Americas. On June 23, 2021, a total of 184 countries voted in the United Nations General Assembly for the United States (U.S.) to end its blockade of Cuba. Only the U.S. and Israel did not support this resolution. The UN General Assembly overwhelmingly voted to end the U.S. blockade of Cuba for nearly three decades. The