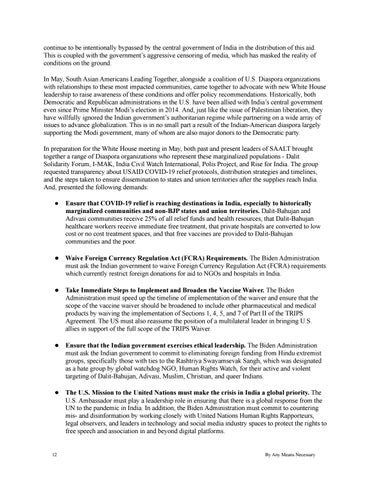 continue to be intentionally bypassed by the central government of India in the distribution of this aid. This is coupled with the government’s aggressive censoring of media, which has masked the reality of conditions on the ground. In May, South Asian Americans Leading Together, alongside a coalition of U.S. Diaspora organizations with relationships to these most impacted communities, came together to advocate with new White House leadership to raise awareness of these conditions and offer policy recommendations. Historically, both Democratic and Republican administrations in the U.S. have been allied with India’s central government even since Prime Minister Modi’s election in 2014. And, just like the issue of Palestinian liberation, they have willfully ignored the Indian government’s authoritarian regime while partnering on a wide array of issues to advance globalization. This is in no small part a result of the Indian-American diaspora largely supporting the Modi government, many of whom are also major donors to the Democratic party. In preparation for the White House meeting in May, both past and present leaders of SAALT brought together a range of Diaspora organizations who represent these marginalized populations - Dalit Solidarity Forum, I-MAK, India Civil Watch International, Polis Project, and Rise for India. The group requested transparency about USAID COVID-19 relief protocols, distribution strategies and timelines, and the steps taken to ensure dissemination to states and union territories after the supplies reach India. And, presented the following demands: ●

Ensure that COVID-19 relief is reaching destinations in India, especially to historically marginalized communities and non-BJP states and union territories. Dalit-Bahujan and Adivasi communities receive 25% of all relief funds and health resources, that Dalit-Bahujan healthcare workers receive immediate free treatment, that private hospitals are converted to low cost or no cost treatment spaces, and that free vaccines are provided to Dalit-Bahujan communities and the poor.

● Take Immediate Steps to Implement and Broaden the Vaccine Waiver. The Biden Administration must speed up the timeline of implementation of the waiver and ensure that the scope of the vaccine waiver should be broadened to include other pharmaceutical and medical products by waiving the implementation of Sections 1, 4, 5, and 7 of Part II of the TRIPS Agreement. The US must also reassume the position of a multilateral leader in bringing U.S. allies in support of the full scope of the TRIPS Waiver.

● Ensure that the Indian government exercises ethical leadership. The Biden Administration must ask the Indian government to commit to eliminating foreign funding from Hindu extremist groups, specifically those with ties to the Rashtriya Swayamsevak Sangh, which was designated as a hate group by global watchdog NGO, Human Rights Watch, for their active and violent targeting of Dalit-Bahujan, Adivasi, Muslim, Christian, and queer Indians.

● The U.S. Mission to the United Nations must make the crisis in India a global priority. The U.S. Ambassador must play a leadership role in ensuring that there is a global response from the UN to the pandemic in India. In addition, the Biden Administration must commit to countering mis- and disinformation by working closely with United Nations Human Rights Rapporteurs, legal observers, and leaders in technology and social media industry spaces to protect the rights to free speech and association in and beyond digital platforms.