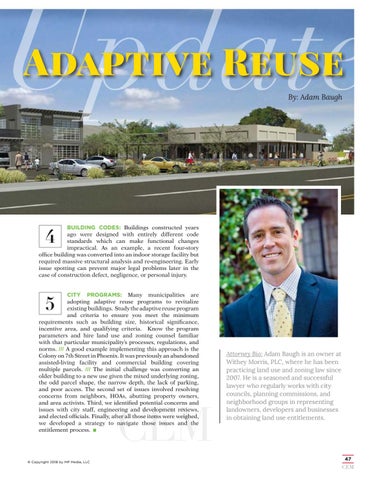 BUILDING CODES: Buildings constructed years ago were designed with entirely different code standards which can make functional changes impractical. As an example, a recent four-story office building was converted into an indoor storage facility but required massive structural analysis and re-engineering. Early issue spotting can prevent major legal problems later in the case of construction defect, negligence, or personal injury.

CITY PROGRAMS: Many municipalities are adopting adaptive reuse programs to revitalize existing buildings. Study the adaptive reuse program and criteria to ensure you meet the minimum requirements such as building size, historical significance, incentive area, and qualifying criteria. Know the program parameters and hire land use and zoning counsel familiar with that particular municipalityâ&amp;#x20AC;&amp;#x2122;s processes, regulations, and norms. /// A good example implementing this approach is the Colony on 7th Street in Phoenix. It was previously an abandoned assisted-living facility and commercial building covering multiple parcels. /// The initial challenge was converting an older building to a new use given the mixed underlying zoning, the odd parcel shape, the narrow depth, the lack of parking, and poor access. The second set of issues involved resolving concerns from neighbors, HOAs, abutting property owners, and area activists. Third, we identified potential concerns and issues with city staff, engineering and development reviews, and elected officials. Finally, after all those items were weighed, we developed a strategy to navigate those issues and the entitlement process.

Attorney Bio: Adam Baugh is an owner at Withey Morris, PLC, where he has been practicing land use and zoning law since 2007. He is a seasoned and successful lawyer who regularly works with city councils, planning commissions, and neighborhood groups in representing landowners, developers and businesses in obtaining land use entitlements.

This issue features our annual "Mentors & Mentees" interviews, a new editorial section called "Fast 5" and other hot trends in CRE. 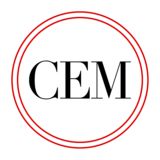