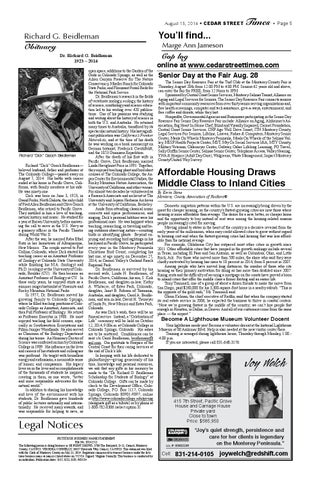 Richard “Dick” Gooch Beidleman Richard “Dick” Gooch Beidleman— beloved husband, father and professor at The Colorado College—passed away on August 7, 2014. His battle with cancer ended at his home in Pacific Grove, California, with family members at his side. He was ninety-one. Dick was born on June 3, 1923, in Grand Forks, North Dakota, the only child of Fred Allen Beidleman and Olive Gooch Beidleman, who retired to Pacific Grove. They instilled in him a love of teaching, natural history, and music. He studied for a year at Brown University, before answering the call to serve in the U.S. Navy as a gunnery officer in the Pacific Theatre during World War II. After the war, he married Reba Ethel Rutz in her hometown of Albuquerque, New Mexico. The couple moved to Fort Collins, Colorado, where Dick started his teaching career as an Assistant Professor of Zoology at Colorado State University while finishing his M.A. (biology) and Ph.D. (ecology) at the University of Colorado, Boulder (CU). He then became an Assistant Professor of Biology at CU. In these early years, he enjoyed stints as a summer ranger/naturalist at Yosemite and Rocky Mountain National Parks. In 1957, Dr. Beidleman moved his growing family to Colorado Springs, where he filled teaching positions at Colorado College as Assistant, Associate, and then Full Professor of Biology. He retired as Professor Emeritus in 1988. He most enjoyed teaching his field courses, especially in Southwestern Ecosystems and Piñon-Juniper Woodlands. He also served as Chairman of the Biology Department during his tenure. An Honorary Doctor of Science was conferred on him by Colorado College in 1989. His influence on the lives and careers of his students and colleagues was profound. He taught with boundless energy and enthusiasm, a memorable sense of humor, and compassion. His legacy lives on in the lives and accomplishments of the thousands of students he inspired, creating in them, as one wrote, “better and more responsible advocates for the natural world.” In addition to sharing his knowledge and love of the environment with his students, Dr. Beidleman gave hundreds of public lectures nationally and internationally. He received many awards, and was responsible for helping to save, as

open space, additions to the Garden of the Gods in Colorado Springs, as well as the Aiken Canyon Preserve for The Nature Conservancy, Mueller Ranch for Colorado State Parks, and Florissant Fossil Beds for the National Park Service. Dr. Beidleman’s research in the fields of vertebrate zoology, ecology, the history of science, ornithology and science education led to his writing over 420 publications. One of his passions was studying and writing about the history of science in both the U.S. and Australia. He returned many times to Australia, transfixed by its spectacular natural history. His last significant publication was California’s Frontier Naturalists, and at the time of his death he was working on a book manuscript on German botanist, Frederick Creutzfeldt, and the 1853 Gunnison Expedition. After the death of his first wife in Pacific Grove, Dick Beidleman married Linda Havighurst Price in 1991. Together, they enjoyed teaching plant and bird short courses at The Colorado College, the Aspen Center for Environmental Studies, the Rocky Mountain Nature Association, the University of California, and other venues. For almost two decades he volunteered as a Research Associate and archivist at The University and Jepson Herbaria Archives at the University of California, Berkeley. Aside from attending classical music concerts and opera performances, and singing, Dick’s personal hobbies were his professional ones. He was happiest when teaching, researching, or traveling and being outdoors observing nature—counting birds or identifying plants. Beyond enjoying and recording bird sightings in his backyard in Pacific Grove, he participated every year in the Monterey Peninsula Christmas Bird Count, completing his last one, at age ninety, on December 27, 2014, in Carmel Valley’s Garland Ranch Regional Park. Dr. Beidleman is survived by his second wife, Linda H. Beidleman, of Pacific Grove, California; his son, S. Kirk Beidleman, and daughter-in-law, Kathy A. Whitacre, of Estes Park, Colorado; daughter, Janet B. Robson of Tasmania, Australia; and daughter, Carol A. Beidleman, and son-in-law, David H. Tiemeyer of Santa Fe, New Mexico and Estes Park, Colorado. As was Dick’s wish, there will be no funeral service. Instead, a “Celebration of Life” ceremony will be held on October 12, 2014, 9:00a.m. at Colorado College in Colorado Springs, Colorado. His ashes are to be scattered. Condolences can be sent c/o Carol Beidleman, beidlemanc@ aol.com. Our gratitude to Hospice of the Central Coast for their caring services at the end of Dick’s life. In keeping with his life dedicated to philanthropy—giving generously of his time, knowledge and personal resources, we ask that any gifts in his memory be made to the “Dr. Richard G. Beidleman Scholarship for Students of Biology” at Colorado College. Gifts can be made by check to the Development Office, Colorado College, P.O. Box 1117, Colorado Springs, Colorado 80901-9897; online at http://www.coloradocollege.edu/giving (designate gift as a tribute) or by phone at 1-800-782-6306 (select option 3).

online at www.cedarstreettimes.com Senior Day at the Fair Aug. 28

Domestic migration patterns within the U.S. are increasingly being driven by the quest for cheaper housing, so the country’s fastest-growing cities are now those where housing is more affordable than average. The desire for a new, better, or cheaper home and the opportunity to buy instead of rent were among the housing-related reasons people increasingly cited for moving. Moving inland to states in the heart of the country is a decisive reversal from the early years of the millennium, when easy credit allowed cities to grow without regard to housing cost and when the fastest-growing cities had housing that was less affordable than the national average. For example, Oklahoma City has outpaced most other cities in growth since 2011. Other affordable cities that have jumped in the growth rankings include several in Texas, including El Paso and San Antonio, as well as Columbus, Ohio, and Little Rock, Ark. For those who moved more than 500 miles, the share who said they were chiefly motivated by housing has risen to 18 percent in 2014, from 8 percent in 2007. Among people who have moved long distances, the number of those who cite housing as their primary motivation for doing so has more than doubled since 2007. Rising rents and the difficulty of securing a mortgage on the coasts have proved a boon to inland cities that offer the middle class a firmer footing and an easier life. Tony Trammell, one of a group of about a dozen friends to make the move from San Diego, paid $260,000 for his 3,300-square-foot home in a nearby suburb. “This is the opposite of the gold rush,” Mr. Trammell said. Glenn Kelman, the chief executive of Redfin, said that when the company started its real estate service in 2006, he expected the business to thrive in coastal centers. “Now we’re growing fastest in the middle of the country; we can’t hire people fast enough in Houston, in Dallas, in Denver. And all of our customers come from the same place — the airport.”

Your lighthouse needs you! Become a volunteer docent at the historial Lighthouse Museum at 80 Asilomar Blvd. Help is also needed at the new visitor center there. Training is arranged during lighthouse hours, Thursday through Monday, 1:00 4:00 p.m. If you are interested, please call 831-648-3176.

“Joy’s quiet strength, persistence and care for her clients is legendary on the Monterey Peninsula.”