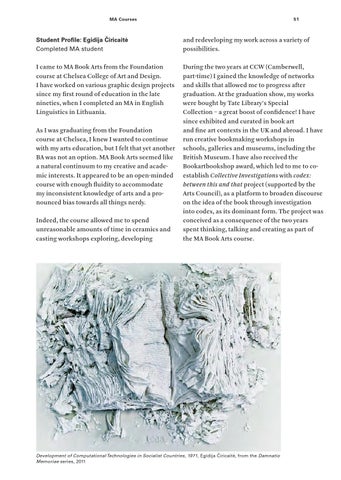 and redeveloping my work across a variety of possibilities.

I came to MA Book Arts from the Foundation course at Chelsea College of Art and Design. I have worked on various graphic design projects since my first round of education in the late nineties, when I completed an MA in English Linguistics in Lithuania.

During the two years at CCW (Camberwell, part-time) I gained the knowledge of networks and skills that allowed me to progress after graduation. At the graduation show, my works were bought by Tate Library’s Special Collection – a great boost of confidence! I have since exhibited and curated in book art and fine art contexts in the UK and abroad. I have run creative bookmaking workshops in schools, galleries and museums, including the British Museum. I have also received the Bookartbookshop award, which led to me to coestablish Collective Investigations with codex: between this and that project (supported by the Arts Council), as a platform to broaden discourse on the idea of the book through inves­tigation into codex, as its dominant form. The project was conceived as a consequence of the two years spent thinking, talking and creating as part of the MA Book Arts course.

As I was graduating from the Foundation course at Chelsea, I knew I wanted to continue with my arts education, but I felt that yet another BA was not an option. MA Book Arts seemed like a natural continuum to my creative and academic interests. It appeared to be an open-minded course with enough fluidity to accommodate my inconsistent knowledge of arts and a pro­ nounced bias towards all things nerdy. Indeed, the course allowed me to spend unreasonable amounts of time in ceramics and casting workshops exploring, developing

This publication marks the fifth year of the Graduate School of Camberwell, Chelsea and Wimbledon Colleges.