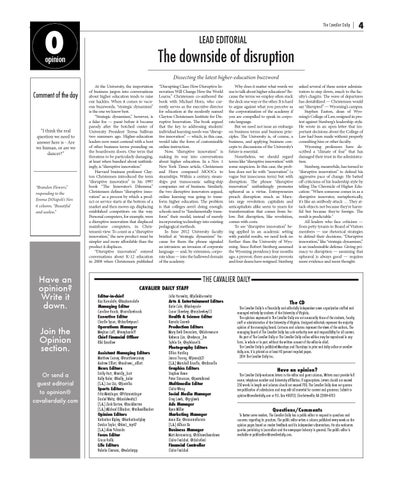 The downside of disruption

“I think the real question we need to answer here is - Are we human, or are we dancer?”

Have an opinion? Write it down. Join the Opinion section. Or send a guest editorial to opinion@ cavalierdaily.com

“Disrupting Class: How Disruptive Innovation Will Change How the World Learns.” Christensen co-authored the book with Michael Horn, who currently serves as the executive director for education at the modestly named Clayton Christensen Institute for Disruptive Innovation. The book argued that the key to addressing students’ individual learning needs was “disruptive innovation” — which, in this case, would take the form of customizable online instruction. Now, “disruptive innovation” is making its way into conversations about higher education. In a Nov. 1 New York Times article, Christensen and Horn compared MOOCs to steamships. Within a century, steamships put transoceanic sailing-ship companies out of business. Similarly, the two disruptive innovators argued, online learning was going to transform higher education. The problem is that colleges aren’t doing enough: schools need to “fundamentally transform” their model, instead of merely incorporating technology into existing pedagogical methods. In June 2012 University faculty bristled at “strategic dynamism” because for them the phrase signaled an intrusion: an invasion of corporate language — and, by extension, corporate ideas — into the hallowed domain of the academy.

Why does it matter what words we use to talk about higher education? Because the terms we employ often stack the deck one way or the other. It is hard to argue against what you perceive as the corporatization of the academy if you are compelled to speak in corporate language. But we need not issue an embargo on business terms and business principles. The University is, of course, a business, and applying business concepts to discussions of the University’s future is essential. Nonetheless, we should regard terms like “disruptive innovation” with some suspicion. In this case, the problem does not lie with “innovation” (a vague but innocuous term) but with disruption. The phrase “disruptive innovation” unthinkingly promotes upheaval as a virtue. Entrepreneurs preach disruption much as Marxists urge revolution: capitalists and anticapitalists alike seem to yearn for transformation that comes from below. But disruption, like revolution, comes with costs. To see “disruptive innovation” being applied in an academic setting with painful results, we need look no further than the University of Wyoming. Since Robert Stenberg assumed the Wyoming presidency four months ago, a provost, three associate provosts and four deans have resigned. Stenberg

asked several of these senior administrators to step down, much to the faculty’s chagrin. The wave of departures has destabilized — Christensen would say “disrupted” — Wyoming’s campus. Stephen Easton, dean of Wyoming’s College of Law, resigned in protest against Stenberg’s leadership style. He wrote in an open letter that important decisions about the College of Law had been made without properly consulting him or other faculty. Wyoming professors have described a “climate of fear” that has damaged their trust in the administration. Stenberg, meanwhile, has turned to “disruptive innovation” to defend his aggressive pace of change. He batted off criticisms of his leadership style by telling The Chronicle of Higher Education: “When someone comes in as a disruptive innovator, metaphorically, it&#39;s like an antibody attack … They attack objects not because they&#39;re harmful but because they&#39;re foreign. The result is predictable.&quot; All leaders who face criticism — from petty tyrants to Board of Visitors members — use rhetorical strategies to defend their decisions. “Disruptive innovation,” like “strategic dynamism,” is an inadmissible defense. Giving primacy to disruption — assuming that upheaval is always good — requires more evidence and more thought.

The Cavalier Daily welcomes letters to the editor and guest columns. Writers must provide full name, telephone number and University affiliation, if approrpriate. Letters should not exceed 250 words in length and columns should not exceed 700. The Cavalier Daily does not guarantee publication of submissions and may edit all material for content and grammar. Submit to opinion@cavalierdaily.com or P.O. Box 400703, Charlottesville, VA 22904-4703

To better serve readers, The Cavalier Daily has a public editor to respond to questions and concerns regarding its practices. The public editor writes a column published every week on the opinion pages based on reader feedback and his independent observations. He also welcomes queries pertaining to journalism and the newspaper industry in general. The public editor is available at publiceditor@cavalierdaily.com. 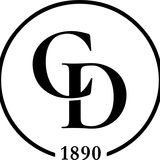